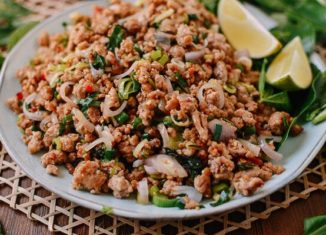 Fried rice and other staples of American Chinese cuisine are a popular choice across the United States, but they are far from the only option. Asian food includes a colorful array of local tastes, textures and spice blends depending on the native region. Comparable cuisine in the United States may not be exactly like it is when prepared in its native region, but there are still plenty of interesting and off-beat options to try.

Laotian cuisine has several feature dishes that distinguish their cuisine from their cultural neighbors in Asia. Larb is one of the most famous Lao menu items. This dish includes spiced meat from various sources combined with a blend of herbs and greens. The sheer variety found in this one dish offers dozens of tantalizing options for Asian food fans. Lao cuisine is also characterized by the presence of sticky rice, which features prominently in many of their regional dishes.

Hot pots aren’t the most convenient choice for delivery or take-out, but they can quickly become one of your favorite Asian food choices. Hot pots, also known as steamboats, is a method of cooking items in a broth at the dinner table itself. Maintaining the pot at a simmer allows diners to eat at their own pace while enjoying the full flavor of freshly-cooked ingredients. Diners can choose what ingredients they want in their hot pot and which flavors they want to be the strongest. Hot pots typically serve multiple people and create a unique communal dining environment. Because of their simpler nature, hot pots is not too difficult for you to recreate in your home, although some of the ingredients may be harder to find.

Even fans of American hot dogs and hamburgers can appreciate the taste of Korean barbecue. Korean barbecue often features chicken, pork, or cuts of beef (known as bulgogi) cooked over charcoal or gas grills. Some items are marinated in advance, while others are seasoned with a spice rub before hitting the heat. Some types of spices may be a bit too hot for some diners, but Korean barbecue also has plenty of options for those who prefer a milder flavor. If you’re eating your Korean barbecue with heavy sauces, there’s a good chance it has been Americanized.

Instant noodles may be a fixture of life for many college students, but they don’t usually compare to their namesake. True Japanese ramen noodles are a full-fledged meal that includes ample broth and noodles alongside sizable cuts of meat, egg, vegetables and spices. Authentic Japanese ramen takes hours to simmer, making the meat tender and bringing out the full range of flavors from the spices and vegetables. Restaurants with a broad ramen selection typically offer several levels of spiciness as well as gluten-free or low-sodium options.

You may have heard of bao buns from the Pixar short, “Bao.” These are steamed buns made from a sweet dough, stuffed with tender pork. They do take some time and effort to make, so you won’t likely see them on American-Chinese restaurant menus.

Gua bao originated in Taiwan, where it is a popular street food, but has modified variations in China, Japan, Hong Kong, and areas of the United States with heavier Chinese- and Asian-American populations. You may be able to spot these pork bao in the freezer section of your local grocery store. Otherwise, you just might have to be adventurous and make them on your own.

With dozens of distinct cultures and countries contributing to its development, Asian cuisine encompasses a vast and diverse collection of delicious meal items. There’s always the risk of eating something you don’t like when trying new things, but the opportunity to discover new favorites is often work the risk.

How to eat passion fruit?
Will Super Greens As A Health Food Continue To Trend?
Valentine's Day Dinner Ideas for a Cozy Night at Home
How To Make A Legit CHARCUTERIE Board?
Dangerously Delicious:7 Australian Foods That Are Worth Every Bite