You are here
Home > Articles > Is Cannelloni the king of Italian pasta? 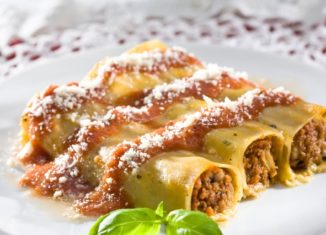 Noble in their shape and size, served at sophisticated occasions as well as Sunday gathering of Italian families and flexible in their presentation with both traditional and creative recipes: the Cannelloni tubes are the real kings of pasta and the go-to solution for surprising your dinner party guests with a dish that will taste even better when warmed the following days.

Although the origin of cannelloni is relatively recent, its enormous versatility and delicious flavor has quickly made it a classic in the kitchen worldwide. Cannelloni is a festive dish that tastes like tradition and is one of the first recipes that comes to mind when we remember the delicious meals at grandma’s house.

The word cannelloni comes from the Italian term “cannelloni”. The diminutive of “canna”, which means cane, is what refers to the characteristic cylindrical shape of this paste. However, the origin of cannelloni, as we know it, is more diffuse.

The story of Cannelloni

The Italian journalist Gaetano Afeltra tells in his book “Nascita dei cannelloni ad Amalfi” that cannelloni emerged in Amalfi in 1924 from the hands of chef Salvatore Coletta, who after several experiments prepared a dish he called “cannelloni” and quickly won fame in the surroundings of the city.

Afteltra says that Salvatore presented the dish to Alfredo Vozzi, owner of the Cappuccini Hotel in Amalfi, who decided to send the recipe to the Barbaro family, owner of the other Amalfi hotel, the Hotel Luna. After trying the dish, Andrea Barbaro, who was a well-known gourmet, gave the order to ring the church bells to share with the birth of this new recipe: the cannelloni.

There are those who do not share this story and affirm that the origin of the cannelloni should be attributed to the Neapolitan Vincenzo Corrado, who in the 18th century boiled a type of pasta in the form of a very large tube that was then filled with meat and truffles, and then finished cooking in a meat sauce, although in reality it was the typical Paccheri of Campania that are a bit far from the current cannelloni.

“The cannelloni tubes are the ideal product for supermarkets and retailers to list in their stores, as consumers purchasing such “occasion” food are planning dinners and gatherings, therefore likely to purchase wine, desert and many other higher ticket products that improve the trader’s profitability” declare representatives of Pastificio Rigo, the world’s leading supplier of cannelloni as well as other special shapes pasta for oven baking such as lasagna sheets, manicotti and jumbo shells. “our partners enjoy earning margins well above industry standards with this relatively niche pasta shape, that enjoys consistent consumption across all markets”.

Cannelloni Bolognese: There are different types of cannelloni, but one of the best known in the world is undoubtedly these. It is a meat-based dish in which the cannelloni are filled with Bolognese or ragout sauce, made with minced beef and pork, carrots, celery, onions and tomatoes, then bathed in bechamel sauce and cheese is added grated parmesan to gratin.

Cannelloni Rossini or cannelloni alla Rossini: Another type of cannelloni that is worth highlighting. Stuffed with meat or chicken with foie gras, truffles or mushrooms and a touch of sweet wine, and bathed with bechamel, Parmesan cheese and / or grated truffle, a recipe attributed to the composer Gioachino Rossini, who is said to be a great chef.

Catalan cannelloni: One of the most popular types of cannelloni in Spain. In this recipe, the pasta is not left al dente, but it is cooked well and instead of using minced meat for the filling, first the meat is roasted and then mixed with the fried vegetables before being minced.

Cannelloni Ricotta e Spinaci: It is, however the ricotta and spinaci (cottage cheese and spinach) filling to be king in the Italian cuisine, this delicate mix fits perfectly with thee cannelloni, the taste is not overwhelmed by the spinach, making it the ideal dish to persuade kids to eat such vegetable.

The ultimate trick to cannelloni

A trick is to fill a sandwich bag with the filling and cut one corner of it in order to squeeze everything out of it straight from there directly into the cannelloni tubes, without making a mess of getting one’s hands dirty.

Overall, Cannelloni tubes, together with lasagna sheets, giant jumbo shells and other pasta shapes intended to be baked in an over are great for a dinner with family or friends as they can be prepared in big quantity and remain tasty when re-heated the following day. Pair your cottage cheese & spinach cannelloni with some Prosecco or Lambrusco wine (or both?), serve them on a rustic squares table cloth and give your friends and family the best Italian-themed dinner party of the year

Enjoy the sweetness of a home made rice pudding
How London Quietly Became a Foodie Destination and Started Turning Heads
How To Slice Cooked Steak: All You Need To Know
10 Mistakes Beginner Bakers Make and How to Fix Them
Bizarre Food you can eat in Thailand