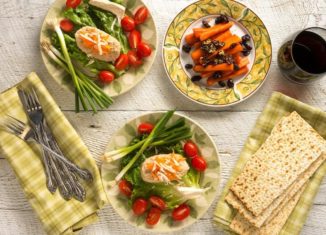 Pesach is one of the most widely celebrated  Jewish holidays. A special dinner, the Seder is the most solemn ceremony of all existing in Judaism. It is held on the first and second  days of Passover. A time to reach out and reflect, relatives and those who are left alone during the festive days are invited to be together for Passover. The main staple  of Passover is Matzo, an unleavened flatbread eaten throughout the Holiday, replacing leavened bread.

On the table, adding to matzo, an example of the six dishes generally prepared for the Seder are : Zeroa – a piece of fried lamb or chicken meat on the bone, Maror – bitter grass, Karpas – any garden greens,Charoset – a mix of grated apple slices and nuts, Chazeret – grated horseradish and Beitza – boiled eggs.

The greens are usually dipped in saltwater to symbolize salty teardrops shed by the Jewish people held  Egyptian slavery, and the sea that they crossed during the exodus. It is believed that a Jew should drink four glasses of wine or grape juice during the Seder. The fifth glass is filled and left for the prophet Elijah who will return on the eve of Passover to earth to usher in the coming of the “day of the Lord, great and terrible.”

There is a tradition called Afikoman,- where adults hide a small piece of Wrapped matzo so that the children can look for it.

Despite the common faith, even the traditions of cooking on Passover vary from region to region. For example, among Ethiopian and Yemeni Jews, it is customary to bake not only hard matzo but also soft matzo as well, which is very reminiscent of traditional Mediterranean pita bread.

Sephardic and Ashkenazi communities cook a variety of dishes customary to their country of origin. However,festive dishes have begun to appear in Jewish cuisine that combines both traditions.

Do you want to try all the traditional types of Passover dishes? What about their modern adaptations in trends of Eastern, Mediterranean or even Thai cuisine? Then be sure to check out Passover 2020 in Miami beach! The Chef of The Alexander Hotel and Resort prepared an incredible menu for Passover, masterfully combining the products that make up the basis of the Seder with modern cooking techniques. During the week of Passover at The Alexander Hotel, you will find a variety of appetizers based on bitter and sweet greens, beef steaks, barbecue chicken, traditional fried chicken,Gefilte Fish style with various sauces, with different flavors, traditional chicken soup with meatballs or noodles and a full breakfast menu,lunches, dinners, prepared according to the rules of kashrut.

In addition to the correct selection of products, the hotel chefs work under the supervision of a Miami rabbinate, Kosher Miami and the entire Passover Program must be approved by the rabbi.

The celebration of Passover, catering to all communities at with kosher food in Miami Beach.