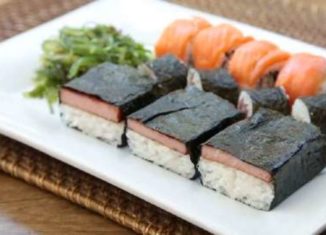 Alone, in the middle of the Pacific Ocean lie the 137 islands that make Hawaii. It took thousands of years for volcanoes to rise from the deep blue waters to become the green and warm islands we now know and love.

And it’s with the same fiery passion that people there developed their unique cuisine.

Snorkeling, trekking, and spending the day on the island’s famous beaches are a few things you can’t miss on your visit, but getting to know the local, authentic Hawaiian food is a must.

If you were wondering what to eat in Hawaii, look no longer, there’s something here to cater to every palate. Take note,  here are the most representative dishes in Hawaii.

1. Saimin, a Noodle Soup with No Comparison

The islands have experienced many immigrant waves from Asia through the years, and people always bring with them their culinary expertise.

It comes as no surprise that Siamin, a Japanese-inspired dashi broth with wheat and egg noodles, is part of Hawaii’s gastronomy.

Green onions, seaweed, shredded pork meat, and hard-boiled eggs are familiar ingredients, but there are lots of variations.

2. Sweet Potatoes, in All Forms and Styles

Sweet potatoes are a famous Hawaiian tuber. You can find them smashed, in casseroles or stuffed with something else in menus all around the islands. Fried sweet potato chips, for example, are popular snacks.

The appealing purple sweet potatoes, grown only in Hawaii and some parts of Asia, are just as tasty as the regular kind, but have a lovely violet-hue that makes them unique. Grown alongside taro roots, another Hawaiian staple, sweet potatoes are more fashionable than ever.

3. Poke, a Fresh Bowl that Tastes Like the Sea

Poke is part of the native Hawaiian cookbook and one of its most iconic dishes. Raw fish, from salmon to tuna, and sometimes octopus are the main ingredient of this fresh dish.

The seafood dish is made with raw fish, green onions, soy sauce, sesame oil, cucumbers, seaweed, and anything else available on the island, all tossed together in a balanced, enticing combination.

Poke is a great appetizer or main course. There are many styles, and everyone has its secret recipe, but Poke is one of those dishes that never disappoint.

Sometimes called beef luau, this is a local meat stew prepared with tough cuts like chuck and round that inevitably tenderize after a good rolling boil. The flavor comes from taro leaves, the same autochthonous plant present in many authentic Hawaiian dishes.

Hawaiian food is often straightforward and comfortable, but full of flavor, and the luau stew is an excellent example of this.

Did you know: Luau is actually the local name for taro.

Mana is a powerful Hawaiian word that derives from the term for divine, mighty and privileged. The dish Mana Pua, also called Mea Ono Puaa, means «a sweet pork pastry».

Mana pua are Chinese style pork-filled dumplings, or dim sum. Juicy shredded pork meat inside a steamed bun is a better description for these delicious savory treats that everyone loves, and for good reasons: They’re easy to carry, fast to make, and utterly satisfying.

Similar to a burger, but not quite like one, Loco Moco comprises white rice topped with a burger patty, gravy, and a fried egg.

Invented in the 1950s, it has gained a place amongst Hawaii’s most well-known dishes, especially after being featured in a good deal of travel and destination TV shows. A comfort dish for people to enjoy casually on any day, Loco Moco is a wholesome meal on a plate, and it’s practical.

In the same way as other comfort meals like the ubiquitous Plate Lunch (white rice, macaroni, and the main dish,) Loco Moco might not be spectacular, but it’s filling and tasty.

This popular pit-oven, slow-cooked dish consists of any protein, from chicken and beef to more traditional fish or pork (the famous Kalua pig,) covered with lau, or taro leaves and cooked underground for long hours; it’s a beauty.

The secret is in the tightly packed, evenly steamed taro bundles, and in adding lard to the filling to make it extra unctuous and rich.

This is one of the most beloved dishes in the Hawaiian Islands.

Hawaii is the largest consumer of the canned, processed meat in the country. Famously labeled as Spam, Hawaiians eat millions of cans a year. The islanders love for the salty treat began during World War II, where soldiers stationed in Hawaii ate Spam regularly.

There are dozens of spam-based dishes in Hawaii. Most of them entwined with Asian tendencies, like Spam Musubi, an onigiri-like sushi snack that counters the intense, salty flavors of Spam with steamed rice, all held together with nori seaweed.

Known as Pateles, for the dialect of Puerto Ricans who migrated to the island, Hawaiians fill this banana dough dumpling with pork meat and season it with rich and flavorful adobo. Tightly tucked in banana leaves and boiled, they become tender and luscious.

Ideal at all times of day, this snack is hearty, flavorful, and very satisfying.

10. Shaved Ice, Perfect for a Cool-down

With warm, humid weather, it’s only natural that one of Hawaii’s favorite sweet treats is no other than shaved ice, but don’t think for a second it’s a simple dish. The varied toppings, from syrups to fruits, chocolate, and almonds, make shaved ice a delightful, fresh treat with a world of possibilities.

Now you know what you eat in Hawaii and what to look for the next time you’re in the islands, try all the dishes above and find your favorite — They’re all worth seeking.

With classics that didn’t made the list, including Lomi salmon and Poi, there are still lots of delicious meals to discover, so, we hope you’re hungry!

Top Dog: 7 Best Regional American Hot Dog Styles You Need to Taste
15 Texas Dishes You Have To Try
Great Foods to Expect On a Hawaiian Dinner Cruise
Celebrating Passover - Traditional Food
Top 10 Foods to Try When You're in Mexico