You are here
Home > Articles > History of the Chinese Mooncake 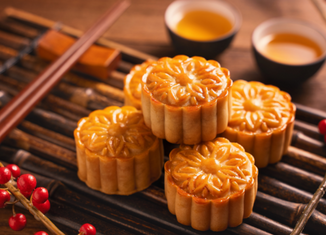 History of the Chinese Mooncake: In China, the eighth lunar month is an important time to gift mooncakes to friends and family members. Mooncakes are a social and business tradition, so gifting mooncakes is a very common custom. Many shopping malls have mooncake fairs as the month approaches.

The history of the Chinese mooncake stretches back to ancient times. During the Mongol invasions, Chinese residents were forced to give the Mongol rulers food as a tribute. These gifts were disguised as mooncakes. But a message hidden inside the mooncake was actually a warning to betray their imperial rulers in an act of espionage, deception, and liberation. Mooncakes are still eaten today in commemoration of this story.

These early mooncakes were often made of rice flour and were rolled and folded to resemble a moon. During the Ming dynasty, a rebel leader called Zhu Yuanzhang put a secret message inside them, telling people to eat these cakes to stay alive. Soon after, the Mongol government was overthrown, and the Ming Dynasty was founded. Although the Chinese mooncake’s association with the Mid-Autumn Festival dates back to the Shang Dynasty, the festival did not become popular until the Tang dynasty (618AD-907AD). During the mid-Autumn festival, the Emperor Xizong presented these round cakes to scholars.

The Mid-Autumn Festival is celebrated on the 15th day of the eighth month in the Chinese lunar calendar and has its roots in ancient China. It is one of the largest festivals in Mainland China and East Asia and is associated with the moon. It is a time for celebration and family reunion, focusing on love, unity, and the future.

The Mid-Autumn Festival has an impressive history, dating back over three thousand years. It originates in the Moon Worshiping practices of the Zhou and Han dynasties. It was the practice of ancient Chinese emperors to worship the moon during the autumn season, believing it would bring them a plentiful harvest the following year. The practice eventually spread to ordinary people.

Lanterns are also an integral part of the Mid-Autumn Festival. During the festival, lanterns are set out in parks and other public places, often in the form of animals, plants, and flowers. The traditional lanterns often feature the lucky color red and are intended to bring good luck.

The Shanghai-style mooncake has a rich history, and many of its most notable characteristics date back centuries. Its distinctive crust, which is similar to a pastry dough, is layered with layers of savory meat filling. It is also filled with a sweet-salty mixture of nuts.

It is not difficult to find this traditional Chinese dessert, which is a staple in the Chinese New Year. The mooncake is traditionally given to a Chinese significant other in a festive atmosphere, and many people purchase them as gifts to mark the occasion. Some bakeries offer discount coupons to encourage customers to buy mooncakes from their shop.

The mooncake’s history dates back to the Zhou dynasty. In the Ming dynasty, when revolutionaries aimed to overthrow the Mongol Empire, military leader Zhu Yuanzhang cooked up a plan to hide a secret message within an inconspicuous mooncake. He distributed the mooncakes to the populace in order to spread the message.

While a mooncake may be small in size, it packs a big flavor punch. These little treats are ubiquitous in Shanghai, but some places take them to another level. These treats are no longer simply snacks – they are becoming delicacies and are even being infused with avant-garde flavors.

Shanghai-style Chinese mooncakes are a sweet and ultra-rich pastry. They are traditionally filled with a dense lotus seed paste and salted egg yolk. They are baked in wooden molds to give them the distinctive round shape and a distinctive raised pattern on the top crust. These mooncakes are commonly shared with family and friends during special occasions and often served with tea.

A Shanghai-style Chinese mooncake has a tender crust. It is filled with a variety of ingredients, and its crust is similar to that of a Western pie crust. It may contain walnuts, watermelon seeds, peanuts, sesame seeds, or other nuts. It may also contain pieces of rock sugar or candied winter melon.

Nowadays, Chinese mooncakes are popular as a celebratory gift for the eighth lunar month. While they are a traditional part of Chinese culture, they are not necessarily the healthiest Chinese pastries. They contain significant amounts of sugar and salt, and they typically contain 700 to 1,000 calories. For this reason, the media that circulates in East Asia often reminds readers not to overindulge in mooncakes.

The Mid-Autumn Festival is one of the essential celebrations in China, second only to the Chinese New Year. It is an ancient festival that has multiple myths and legends surrounding it. It is celebrated on the fifteenth day of the eighth lunar month and corresponds to mid-October in the Gregorian calendar.

11 Dessert options for those who are blessed with a sweet tooth!
What is Shawarma?
11 Foods Your New Mom Friends Will Love This Holiday Season
You have to try these two Haitian fried dishes
Going Greek: An Introduction to the Delicious Cuisine of Greece