You are here
Home > Articles > How is normal honey different from mad honey? 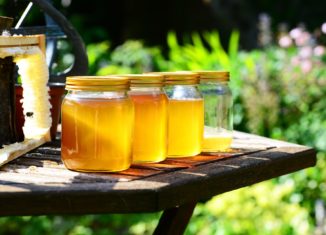 Mad honey is known as Himalayan cliff honey which is obtained from the wild bee species called Apis laboriosa inhabiting in the higher altitude of Nepal and Bhutanese drier mountainous forest and foraging in wildflower nectar (Alicja Muir., 2017). However normal honey is generally obtained from the domesticated bee species commonly found in lower altitudes of Nepal like Apis cerana and Apis mellifera and Apis Florea foraging in the flower and plants nectar that we commonly plant around our surroundings.

The flower that bees forage on, its foraging nature, and the altitude, climate and temperature the bees inhabit make a huge difference in the nature of honey produced by the species of bees. Hence significant differences can be seen between the normal honey and mad honey from respective honey bee species.

Normal honey can be produced commercially by installing artificial beehives in the area where flowers for the nectar are easily available and also the normal honey-producing bees forage in regular crops/fields and flowers which have high chances of being sprayed with the pesticide and the chemical fertilizer applied crops. Also, normal honey-producing honey bees are found to have been treated with antibiotics and winter sustenance where antibiotics like ciprofloxacin are commonly used to treat honey bees and nourishments sources like sugar-rich diets and fruit syrup like tapioca, cane, beet are used. And the normal honey is also decontaminated and pasteurized by heating at a high temperature which tends to destroy enzyme if the temperature is not regulated properly which ultimately causes toxin level to rise. And the commercial honey available has the additives added in many cases.

However, the mad honey obtained from Apis laboriosa species of bee is wild so the honeycomb is prepared by the bees themselves in rocky mountains where one colossal sheet is prepared on cliff face which makes them inhabit a completely natural environment unlike the other bee species reared in artificial environments. Since Apis laboriosa are wild cold tolerating species found in high Himalayan altitudes so no artificial winter sustenance is required and nourishments sources are given which makes their honey (mad honey) completely different from normal honey which results in organic and natural properties. And the nature of mad honey is raw and crude as they are directly extracted out from the comb’s cell. And the mad honey is not added with any additives and is not overheated and ultrafiltered so it is more pure, real, and natural than the normally available honey in the market. However, the purification is done to remove the rough particles of pollen, dead bees, wings, and wax hunks by filtering it in a fine mesh bag. The nature of honey has vast differences in quality than the normal honey as the flower it rears on is different than the normal species of the honey bee. Rhododendron ponticum flowers are the major nectar source of wild bee Apis laboriosa which finally yield the mad honey in a honeycomb.

Also, the research has proved that the medicinal properties of mad honey is significantly higher than the normal honey as the phenolic level and active antiradical, antimicrobial and antioxidant properties is peculiarly found only in mad honey obtained from Apis laboriosa (Silici et al, 2010).

The spring honey also is known as red honey/ mad honey obtained from Apis laboriosa is collected at a higher altitudes and has special qualities as it is the result of the nectar collected from the rare white rhododendron, from Aconitum spp and Entada scanders which only grow in higher altitude. The mad honey obtained from the laboriosa has intoxicating properties and relaxing qualities which makes them medicinally valuable and yield a demanding market in Japan, Korea, and Hong Kong (Ahmad, Farooq, Surendra Raj. Joshi, 2003).

Mad honey has cytotoxic and antiproliferative effects as a result of the nectar of rhododendron which has been reported to show anticancer action in the human cancer cell lines and human colon (Byub KS et al., 2005). And the hallucinogenic effect is also one of the peculiar features of mad honey which makes it different from other normal honey. Due to this, it was earlier popular among youths while the older generation people are also found to have shown interest due to its aphrodisiac properties (Himalayan Red Honey aka mad, toxic, hallucinogenic honey from Nepal).

There are some antioxidant properties and a constituent of mad honey that makes it differ from the normally available honey. On an average phenolic content of honey that mad honey consists of is 0.24 to 141.83 mg GAE/100g honey. While antioxidant action of honey has been found to be ranging from 12.76 and 80.80 mg AAE/G honey. And the honey sample showed radical scavenging properties ranging between 2.30% to 90.73%. Also, the antibacterial effect of mad honey was reported to be high against Pseudomonas aeruginosa and Proteus mirabilis.

Also, if you see the traditional medicinal properties of mad honey we can clearly see how it is different from the normal honey: The sunburn is healed when mad honey is rubbed on with ‘custom’ and salt (Dioscurides ,40−90 AD). Also, the bruises are reported to be cured when mad honey is applied combined with aloe- (PLINY. Naturalis Historia, HG Bohn, 1956). Aesthetic properties of mad honey are also reported traditionally where the skin of females was used to soften when applied mixing it with costus.

Antileptic properties of mad honey are also reported to have been derived by people in an ancient time where gastrointestinal disorder and abdominal pain and indigestion problem, peptic ulcers, gastritis were cured by the use of mad honey (GUNDUZ A et al., 2006; SÜTLÜPINAR N et al. 1993).

Also, the antihypertensive effect of mad honey has resulted in its popularity in the modern market as it calm the mind and also believed to have reduced the risk of coronary heart disease (AKINCI S, 2008; DILBER E, 2002; BOSTAN M, 2010). The study done in 2017 and published by Ahmet Tekinsoy and his team reported that “the development of drugs to cure the patient of tachycardia accompanied by hypertension can be done by using the toxin present in mad honey”.

The viral infection in cold is also treated by the use of mad honey (ALIYEV F, 2009). And the problem of joints and medication against arthritis is also done by the help of mad honey while the blood glucose level is lowered by the intake of mad honey, it is found to have been popularly used as a sweetener for patients with diabetes mellitus (KOCA I, 2007; DEMIRCAN A, 2009; ÖZTAŞAN N, 2005).

But the amount of mad honey intake greatly matters in avoiding its reversible toxic properties where one teaspoon full of honey in a small amount generates mild, calming and euphoric sensation with increasing feeling of relaxation and contentedness but if the amount of mad honey is not regulated then it might cause mad honey poisoning due to presence of tetracyclic diterpenes i.e grayanotoxins and romedotoxins.

How to Help Picky Dogs Eat Their Food
Why Spanish Food is So Popular in Melbourne
What you need for your Food and beverage marketing strategy
Top 5 tips to seriously improve your food photography techniques
How To Enjoy A Foodie Road Trip In Portland, Oregon