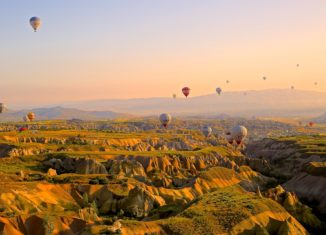 One of the most beloved and refined types of cuisine, Turkish cuisine is deeply rooted in the Ottoman Empire and that is why it is so diverse. Its rich history is also the reason why this cuisine is so vast, with influences from Central Asia, the Balkans, and the Middle East, which are reflected in the different local cuisines of certain regions.

Turkish cuisine mixes a Mediterranean-inspired style of cooking with more lavish, Middle Eastern influences. This means that it can be seen as one of the healthiest cuisines, based on a lot of vegetables, fruit, and olive oil, but without sacrificing flavors or spices. And, because it has so many unique characteristics and interesting qualities, we invite you to explore it in your own kitchen.

Bringing a Turkish flavor to the dishes you prepare at home is not difficult, because the Turkish style of cooking is not a complicated one. Plus, there are several Turkish eating habits that are both healthy and delicious, and that is why we suggest including them more often in your daily routine.

Include Grilled Veggies More Often in Your Menu

Turkish cuisine is famous all around the world for its grilled meat dishes, commonly known as kebap. Kebap is, in fact, the Turkish national dish and one of the most delicious ways of preparing meat. However, fewer people know that grilled vegetables can be just as delicious.

If you have a grill that is large enough, like a 4 burner gas grill, you can enjoy juicy, grilled vegetables all summer long. Eggplants, bell peppers, zucchinis, and tomatoes are some of the key ingredients for traditional Turkish dishes and they are excellent on the grill. Serve them as garnishes for meat dishes, with various dips and salads.

Turkish coffee and Turkish tea are both beloved in this country and each has its own special place. However, tea is what most Turks drink on a daily basis, not just in the morning but also throughout the day. This kind of tea is quite strong but is always served in small amounts.

Try replacing your regular coffee with black tea, which is brewed for about twenty minutes, in a double boiler. Then, the resulting tea concentrate is diluted with warm water, according to each person’s taste, and served with sugar. Don’t forget to serve this kind of tea in special tulip glasses, which are an essential part of the Turkish tea ritual.

Have a Feast at Breakfast

A traditional Turkish breakfast is nothing like the frugal, fast and simple version most of us are used to. Instead, it is a true feast, fit for a king. A proper Turkish breakfast consists of several dishes and includes things such as different types of cheeses and cured meats, savory and sweet pastries, eggs, tomatoes, olives, jam, and honey.

Of course, serving breakfast like this requires time and a bit of preparation, but the experience is totally worth it.

Add Lemon and Yogurt to Everything

This is just as simple as it sounds. These two ingredients are absolutely essential for the Turkish style of preparing food and it’s easy to see why. Fresh lemon juice and zest instantly make us think about seaside vacations and also bring a bright flavor to any kind of dish.

Yogurt is one of the most versatile ingredients you could try. In Turkish cuisine, you will see a dollop of yogurt on everything, from grilled meats and veggies to soups and lentil dishes. Yogurt is also a good base for spices such as mint, red hot pepper, and garlic.

10 Simple Ways to Reduce Your Food Waste & Save Money
Vegan Meal Delivery vs. Cooking at Home
Drop A Few Pounds With These Expert-Approved Tips
Scottish Foods You May Enjoy
Hot Water and Lemon Infusion-Way To Lead A Healthy Life