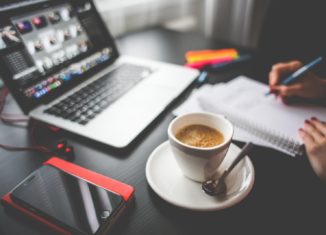 Americans love their coffee. About 90% of them will take at least one cup of coffee every day. Typically, that cup of coffee is the very first thing they drink. While we’re still on percentages, 50% of Americans will take at least 3.1 cups of coffee every day. In such an environment, coffee makers and coffee brands have had something of a boon. Today we have tens of thousands of specialty coffee shops all over the country, with the coffee industry seeing monumental growth.

The coffee industry certainly has done its part in developing our economy. However, even while we sing praises for the magical elixir that is coffee, let us not forget to talk about its merits and demerits for college students. In fact, as a former college student myself, I have always wondered what the pros and cons of caffeine, the active ingredient in coffee, are for a college student. I went and did my research, and here’s what I came up with.

Perhaps the main reason why coffee is so popular among people is that it gives them lots of energy. Caffeine has been linked to enhanced performance in work and school. In fact, some studies have even linked it to better mental health. I know, for one, that caffeine has come to my rescue many times at customwriting essays. When I have an essay to deliver and a tight deadline, and I need to work overtime to get things done, caffeine always gives me that extra energy boost I didn’t know I needed.

There is a lot of talk about caffeine being addictive and the mind control drug on which the population runs. Many of them try to make it look like the powers that be use caffeine as a way to lull us into drifting and being unaware of what is going on between us, so that those who secretly control the world can continue to do so without hindrance. While this dystopian view is interesting, the assertion that caffeine is addictive is a myth. To be sure, caffeine does share a number of characteristics with traditionally addictive drugs. However, it is not as harmful and does not lead to the same effects as truly addictive substances.

It has great long-term benefits

Another myth I hear a lot of is that caffeine is detrimental to health. As it turns out, studies show that caffeine lowers the risk of liver cancer, Parkinson’s disease, cardiovascular disease, and Type 2 diabetes over the long term.

Caffeine comes in many forms

While caffeine is often associated with coffee, coffee isn’t the only form in which you can get it, which should be great news for coffee haters. You can get your dose of caffeine in sweet lattes, teas, or even chocolate.

I know I said that caffeine isn’t addictive, but it does have some strong short term withdrawal symptoms. Suddenly stopping caffeine can lead to withdrawal symptoms as mild as Monday blues on one hand and as extreme as muscle pain and a headache on the other. These symptoms don’t last, however, and aren’t enough to classify caffeine as addictive.

It’s not advised to consume caffeine less than 6 hours before your bedtime. This can cause some serious insomnia. Now, as students, we already know just how hard it is to get a regular sleep pattern without caffeine in the picture. Consuming it just before we go to bed isn’t going to help. So maybe we can stick to having it in the morning and during the day while working, but limit consumption when we know we’ll be going to bed soon.

All caffeine was not created equal

It should be noted that a majority of the studies that research the health benefits of caffeine used black coffee. While you can get caffeine in many forms, the fat and sugar in caffeinated candy, energy drinks, sodas, and lattes are detrimental to your health, especially if you take it on a regular basis.

These are the main pros and cons I thought were most important to know, though this list is by no means exhaustive. I think caffeine is a great thing for college students. It’s certainly going to keep you alert and focused for your studies, which will help you do better in school. However, knowing the cons of caffeine is just as important as knowing the pros. So, consume this wonderful substance with care, and enjoy the benefits it gives in moderation. Like Aristotle said: everything in moderation.

Sandra Larson is a writer and editor with a wealth of experience in many different topics. She particularly enjoys writing about health, technology, education, and self-improvement. When she’s not writing, she is spending time with her cat, Harry, and practicing knitting as a hobby.

4 Good Reasons Why Fermenting Vegetables Is An Incredibly Good Idea

5 Alcohol-Based Desserts to Try for a Special Occasion

Reasons to Hire a Food Truck Catering for Your Party

Must-Have Kitchen Essentials You Need to Own