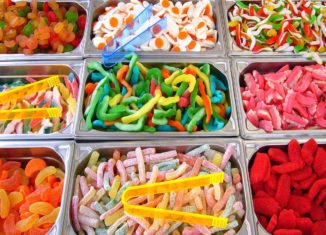 There are many different types of candies around the world. These delicious treats are enjoyed by adults and kids alike. Some holidays like Halloween include a candy giveaway as a part of an annual tradition. Other countries and cultures celebrate other traditions using their own version of candy, with various flavors, ingredients, and textures. Here are a few types of candies that are popular around the world.

A jelly candy is a type of candy that has a stretchy and chewy texture, which includes gummy bears and gumdrops. To produce its unique texture, a stabilizer like gelatin or starch is used to create a flexible candy. Other types of candies include hard candies, licorice, lollipops, gums, and cotton candy. Caramel candy is made by heating granulated sugar with water until a brown, sweet liquid is formed. The produced caramel is used to coat nuts, wafers, or cookies, among other tasty treats, to create a caramelized candy. Chocolate candy bars are made by melting pure chocolate chunks or cocoa powder with milk, making them one of the most popular candies in the world.

Candy Around the World

Each country has its own version of candies that is popular and consumed on many occasions. Some people prepare homemade candies on their national or religious holidays, while other types of candies can be consumed all year. Here’s a list of a few candies that are popular in different countries.

This type of candy is popular in China with its circular shape and pink package that gets everyone excited about the mere sight of it. Made from the Chinese hawthorn fruit, these disc-shaped candies can be found in every home in China. At the first glance, you may think it is more of a crispy wafer, but it is a chewy candy with a sweet, tangy flavor that goes so well with a cup of tea.

Honeycomb chunks sprinkled on a soft swerve cone have become a trend on social media platforms in the last couple of years. This type of dessert is popular in Australia and is considered a staple dessert. It is incorporated in numerous types of candies like those found on lolly-kingdom.com.au, and it is made by a process similar to caramelizing sugar. While the sugar is heated, baking soda is added to create a fizzy reaction. The mixture becomes crispy once cooled, which is broken down into honeycomb chunks and used in many confectionaries.

From its name, Turkish delights are indigenous to Turkey. These tiny squares are served with coffee or tea on a daily basis. They are soft and chewy treats with different flavors, the most common ones being rosewater, orange blossom, mastic gum, and lemon. They are often covered with confectioner’s sugar to give it that sweet powdery finish. They could be either made plain or mixed with nuts like pistachios, almonds, walnuts, or hazelnuts.

This type of candy was created in the 19th century in the United States and has been a classic treat ever since. It is made by heating sugar, which is then pulled and strung several times to allow air to enter to create a sticky and flexible candy. It resembles the texture of gum, but it dissolves in your mouth. They are available in different fruity flavors, in addition to chocolate and peppermint flavors.

These candies are popular in the United Kingdom. They are made into a pink pig shape, which is chewy and soft in texture at the same time. This is accomplished by the mixture of jelly and a marshmallow texture, with a sweet and sour flavor. The gelatin used comes from pork, beeswax, or pea protein depending on the variety.

These popular and traditional Jamaican candies can be easily made at home. They are made with fresh coconut that is cut into small chunks or squares, which are then mixed with brown sugar, ginger, and cinnamon. This creates a toffee mixture that is chewy and crispy in texture.

These candies are popular in New Zealand, which is made from pineapple chunks covered with chocolate. This gives you a tangy flavor from the fruity pineapple mixed with the sweet, creamy texture of chocolate that gives this candy a unique flavor. Some people prefer to keep them in the fridge to create a chewier texture.

How Candy Is Made

Candies are made into different textures, colors, shapes, and sizes using a few common ingredients, with sugar being the base for many of them. The main recipe for any type of candy involves using sugar with water or milk, using a special technique to produce candies that are stretchy, hard, or chewy, among many different textures. The types of candy vary according to the ingredients, manufacturing process, temperature, type of sugar, its concentration, and crystal size.

These are just a few popular candies from around the world. There are a lot more types worth exploring, but they more or less have common ingredients that make these treats the go-to snack to enjoy with a hot beverage or at the movies. In any case, if you’ve got a sweet tooth, they’re impossible to resist!