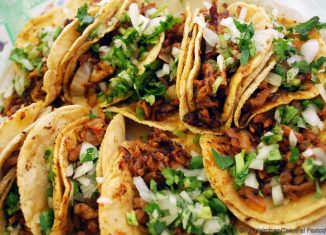 America has long been known as a melting-pot of sorts, bringing together citizens of all backgrounds to create a diverse and interesting society. And if there’s one thing we love in our country, no matter the backgrounds we come from, its food.

One of the great things about America is that it has become a place to experience a multitude of cuisines, sometimes all on the same street. And as the tide of society begins to shift toward becoming more health-conscious, these restaurants are even more tempting, providing an astounding array of vegetarian offerings that shame our American comfort food, which is largely based in meat and carbs.

In many cases, specific cultural diets have been proven to have a variety of health benefits. For example, the Italian diet includes olive oil – great for heart=healthy fats and lowering bad cholesterol – and garlic – for heart health and antifungal properties.

So what are the staples that have taken the American food scene by storm, and stayed there? Fads come and go, but these three dishes have proven that they’re delicious enough to stick around:

You can find tacos anywhere these days, including fast food joints for a quick and cheap meal (check out a list of Taco Bell prices here) – but not all restaurants respect the authenticity of the dish.

Just what is it that has won us over?

First, a bit of history:

No one actually knows where or how the taco originated, but it’s guessed to have shown up around the 18th century. The first dictionary reference of tacos was “tacos de minero,” which means “miner’s tacos,” referencing the dynamite used in mining, wrapped to resemble a taco.

During the 19th century, America had an influx of Mexican immigrants, who brought the taco with them. Female street vendors made it popular with the lower class – but it quickly became recognized as a delicious and quick meal, eventually getting picked up by fast food franchises such as Taco Bell.

So why do we love the taco? Probably for the same reason that the working class did during the early days of taco street vending. Not only is it a quick meal, when prepared correctly, it’s delicious. The basic recipe calls for corn tortillas, beef, lettuce, and tomato. Today, there are many variations on the taco, some created to elevate it in the world of cuisine (duck tacos!).

One of the most attractive things about this dish is its versatility. No matter what you like – for ingredients, or for spice –you can create a quick meal with the basics.

Here are a few of today’s most popular taco recipes:

Sushi is most often referenced as a Japanese dish consisting of rice, seafood, vegetables, and occasionally fruit. But this tasty treat had humble beginnings – the very first form of sushi, called narezushi, began in Asian paddy fields. Fish were fermented with salt and rice, but the rice was discarded.

It wasn’t until the 8th century that Japan really took up sushi and shaped it into what it is today. As Japan started eating three meals a day, rice played a huge role in their cuisine. The introduction of rice vinegar meant that fermentation didn’t take as long, and the rice began to get eaten with the fish.

By the early 1900s sushi had followed Japanese immigration over to the United States. The first sushi shop appeared in Little Tokyo of Los Angeles just after 1900. The dish was quickly altered in many different ways to appeal to overall American culture as well, as eating raw fish wasn’t always at the top of everyone’s list; hence the creation of the popular California roll in Los Angeles, substituting tuna with avocado.

Today, there are quite a few chain restaurants offering sushi as the main dish on their menus. But you can find countless Japanese restaurants in out-of-the-way places, with beautiful cultural aesthetics and delicious menu items.

Why will sushi most likely remain a staple of the American food industry? It’s simple to make, diverse in ingredients, and stands out just enough to capture the eye of any diner with a sense of adventure.

Pho hasn’t been around for quite as long as the other two items on our list, at least not in the takeover of American cuisine. But it’s hitting hard right now, with pho restaurants popping up all over the place.

Pho is a Vietnamese street food originating in the early 1900s. It consists of broth, herbs, meat, and rice noodles, and like both sushi and tacos, it made its way to America through the travel of Vietnamese refugees.

In the late 1980s pho restaurants began to appear in California, and became a mainstream interest in the 1990s. Today there are pho-specific restaurants and many Asian-influenced restaurants with pho on the menu. While not as diverse as the other offerings on our list, there are a few different kinds, including fish-based, chicken-based, beef-based, or just plain vegetable.

No matter your background, we guarantee you’ll enjoy any of the above if you take the time to be a bit adventurous and find a local restaurant that follows the traditions of its cultural cuisine closely.