You are here
Home > CBD > What Are the Most Important Benefits of Delta-8 Tinctures? 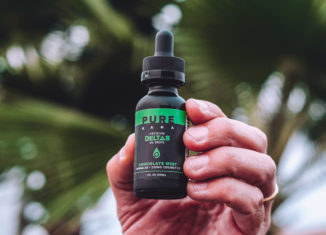 Delta-8 oil is one of the hottest cannabis-related products on the market. However, it is highly controversial. A major debate has raged as to the legality of a delta-8 tincture, with many people believing that the cannabinoid was federally illegal.

Yet, it was a legal gray area that confused many legislators and delta-8 oil sellers. Finally, a ruling by the Ninth Circuit Appellate Court in June 2022 shed some light on the issue. It stated that the text of the 2018 Farm Bill indicated that products containing delta-8 were legal.

While it is good news for delta-8 tincture sellers, it is likely to be short-lived relief for many of them. A growing number of states are restricting the cannabinoid or banning it outright. Before you consider buying any D8 product, check the laws in your state to avoid getting into legal trouble.

It is a shame that delta-8 isn’t available to a greater number of people because research indicates that it has an array of potential therapeutic uses. This article focuses on three of the most important.

There’s no question that chronic pain is the bane of many people’s lives. Estimates vary, but data from the CDC showed that over 20% of adults had chronic pain in 2019. Moreover, about 1-in-13 had a level of chronic pain so severe that it limited work or life activities. In simple terms, pain can significantly decrease a person’s quality of life. Then there is the small matter of increased medical expenditures which can place people in financial difficulty.

To make matters worse, many people with this issue turn to opioids which are highly addictive and often deadly. CDC data revealed that over 75,000 people died from an opioid overdose in the United States in a 12-month period ending in April 2021.

Delta-8 oil is potentially addictive since it causes an intoxicating high. However, D8 is about half as potent as delta-9, the cannabinoid that’s most abundant in marijuana. There is a belief that, like D9, D8 has anti-inflammatory properties that can help quell pain.

An estimated 264 million adults worldwide have a form of anxiety. Meanwhile, a 2020 survey by SingleCare reported that over 60% of respondents admitted feeling a degree of anxiety. The term ‘anxiety’ is broad and typically relates to our body’s response to fear and worry. There are several types of anxiety, including:

As delta-9 may prove too potent for some users, delta-8 could offer a viable alternative. Its anxiolytic properties may lead to a sense of stress relief, relaxation, and general calmness.

Anecdotal reports from countless users state that they tend to feel less anxious after using a few drops of a delta-8 tincture. Of course, one must be careful not to overdo it. While delta-8 is less potent than delta-9, consuming an excessive amount could enhance an individual’s feeling of anxiety.

Therefore, it is best to start with a very low dose and gradually increase if you don’t feel satisfactory effects.

There are various reasons why someone would lose their appetite. Potential causes could include:

Also, individuals undergoing chemotherapy as they battle cancer may find that their appetites are greatly diminished.

One study on mice found that low doses of delta-8 THC were enough to increase food consumption after weight loss. Indeed, there’s a suggestion that D8 could be even better than D9 when it comes to boosting appetite. Sadly, there are no relevant studies on humans available. This is mainly because delta-8 is a relatively new product on the market.

Final Thoughts on the Benefits of Delta-8 Tinctures

The popularity of delta-8 has skyrocketed recently as more people clamor to see what the fuss is about. It offers a similar sensation to delta-9 but is about half as potent. Furthermore, it could have as many benefits as D9, potentially even more.

Unfortunately, you can only buy delta-8 oil if you live in one of the decreasing number of states that allow its production, sale, and use. It may not be federally illegal, but more and more places prohibit its use.

Top 5 Cannabis-infused Edibles
Does CBD Chocolate and Gummies Have Health Benefits?
Enjoy The Healthy Sleep With CBD Oil Gummies
Could 2021 Be the Prison-Break Year for Cannabis-Infused Foods?
Where to Buy the Best CBD Gummies