You are here
Home > Articles > What Kind of Fish is Maguro? 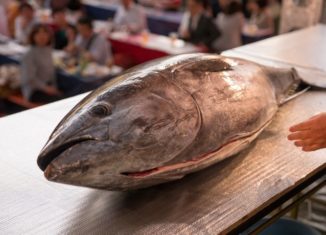 If you are a big fan of sushi, you have probably come across the name maguro. While you may know that this refers to the bluefin tuna that has become one of the most popular ingredients, even if in the past it was not as loved. Part of the increase in its popularity and demand is down to its size, meaning it has a lot of delicious fleshy fish meat, its scarcity, texture, and exceptional flavor.

Even if you know what maguro is when ordering from a menu, that might not be enough to help you understand what is available, as each part of the fish is used and prepared and given its own name. Therefore, to help you out, we are going to look at the most common tuna dishes to give you a good explanation of maguro and what part of the fish they are, so you don’t get a shock when ordering something and expect a nice plate of tuna rolls only to face a massive fish head.

Toro is the name given to the fatty part of a tuna fish’s body and is located within the belly. This is further categorized into two different subtypes and is considerably more expensive than other parts of the fish due to the percentage they make up of the fish as a whole. These are:

Otoro, which is often labeled as o-toro is the fattiest cut of the bluefin tuna and found on its underside. This part of fish is so fatty that almost falls apart like pulled pork and literally can melt in your mouth when it has been cooked perfectly.

Chutoro, or chu-toro as it is often labeled, is the belly part of the fish that sits along its side between the otoro and the akami (more on that in a minute). The flesh used for chutoro can come from the stomach and the back. This is the preferred of the two types of toro because although it is fatty, it is not quite as fatty as the otoro.

There are a variety of different parts of meat that are known as chutoro that have their own names, such as the part close to the tail that is called seshimo, the central part of the back of the fish is called the senaka and the part that is closest to the fish head is known as sekami.

Akami refers to the lean meal taken from the sides of a tuna. This is the cut you will receive if you do not specify that you want toro and order any tuna sushi or tuna roll.

Remember we said about not expecting a plate with a full tuna head, that would be Kabutoyaki. Just like all the other parts of this fish, the head is divided into different cuts and types of meat.

Kabutoyaki is when the head is cooked and served accordingly. The flesh on the inside the top of its head is known as kashiranika.

Kamatoro or Kama is the name given to the gill flesh, of which there are only two pieces of this meat that can be taken from each fish. The kamatoro part refers to the fatty section and has a similar appearance to marbled beef. Kama can be eaten in stews, barbecues, and a multitude of other ways, whereas kamatoro is reserved mainly for sushi and sashimi.

Last but not least, we have the tail. This is a section of fish rich in fat that helps give it a very concentrated and strong flavor. Similarly, to kama, the tuna tail is used in a variety of different ways.

Best Single Serve Coffee Makers in 2019
Tips on how to organise a wedding with yummy vegan treats
Dressing Up Dinner: 5 Tips to Elevate a Simple Meal
Healthy meats to grill
Advice for First Time Drinkers

Easy Health Tips for Everyone