You are here
Home > Drinks > What to drink in Poland 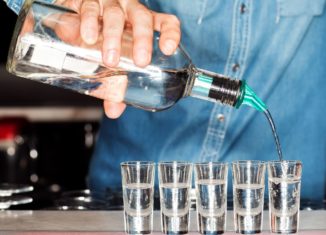 Fruit drink from boiled fresh or dried fruit. They can be made with the addition of sugar or spices, e.g. cloves. Compote is made, among others, from apples, cherries, currants, cherries, strawberries, pears and rhubarb.

(Polish: wódka [ˈvutka]) is a clear distilled alcoholic beverage with different varieties originating in Poland and Russia. It is composed primarily of water and ethanol, but sometimes with traces of impurities and flavorings. Traditionally it is made by distilling the liquid from potatoes or cereal grains that have been fermented, though some modern brands use fruits or sugar as the base. In Poland, vodka (Polish: wódka or gorzałka) has been produced since the early Middle Ages with local traditions as varied as the production of cognac in France, or Scottish whisky

Żubrówka (also known in the English version as Bison Vodka and Bison Grass Vodka) – flavored distilled vodka based on rye with a content of 37.5% alcohol for flavored vodkas and 40% for pure.

Rectified rye spirit is mixed with a decoction of the aromatic turf (Hierochloë odorata) – a species of grass commonly known as Żubrówka, growing in the forests of the Białowieża Forest. The maceration process takes place in two stages – aqueous and alcoholic, and the resulting essence is seasoned and cleaned of deposits and possible impurities. The vodka created in this way acquires a special taste, aroma and yellowish color.

Each original Żubrówka bottle contains one blade of turówka. Properly trimmed, it is put into the bottles by hand. However, it has only a decorative character – it does not affect the color and taste of vodka

Sweet liqueur with a honey and spicy taste, made on the basis of an old Polish recipe from the 17th century. Traditional Krupnik arises from bee honey, spices and natural aromatic herbal ingredients.

High-percentage (sometimes even over 70%), dry alcoholic beverage, baking, made from specially selected Hungarian plums. Usually plum brandy is consumed in its pure form, but like any strong alcoholic beverage, it can be added to drinks. Very strong, so be careful!

The most popular Polish brands of beer are (in Poland): Zywiec, Tyskie, Zubr, Lech, Okocim, Warka.

Traditional alcoholic drink resulting from the fermentation of bee honey, usually linden. Made and consumed since the Middle Ages, among others in Poland and Lithuania. Various honey bouquets are obtained by seasoning the wort with fruit juices (fruit honey) or spices (root honey and “spicy-herb honey”). Most often for the production of root and herb honey: hops, cinnamon, cloves, ginger, pepper, juniper, vanilla, rose petals, mint leaves, almonds, lemon and orange peel.

Alcoholic extracts of fruit, roots, flowers or herbs (or mixtures of ingredients), usually with 40-45 percent alcohol content. They are prepared in the maceration process, i.e. by pouring alcohol on the ingredients to extract and preserve the taste and aroma contained in the charge (macerate). Liqueurs can be sweetened with sugar syrup or honey.

For the production of Liqueurs, alcohol in concentration of about 35 to 96% is most often used. Less often, macerates are flooded with other types of alcohol, e.g. wine, cognac or gin.

Liqueurs are given in small glasses (50 ml) for savory snacks; according to the old Polish tradition, semi-dry and semi-sweet Liqueurs are served with meat.

What is the national drink of Poland?

Definitely vodka. It’s very popular here and is drunk on many occasions

What drink is Poland famous for?

You should try Zubrowka with apple juice or flavoured vodkas.

Yes, but they don’t drink much more than other nationalities and there are some that drinks a lots more. Poles drink more beer and vodka than wine.

What is a Polish shot?

What is a good Polish vodka?

Is there a Polish whiskey?

Baton Rouge recovery center is exactly what you need for an alcohol detox.
Discover a New Twist on Classic Wodka
Delicious Australian Wines You Have to Try
Ending Dinner on a Sweet Note: A Guide to Pairing Wines With Desserts
20 Most Famous Drinks You Should Know How to Make