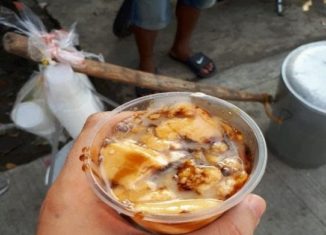 Cebu is one of the 7000 Islands in the Philippines, which is the second most important city after the capital city Manila. It is one of the most popular tourist destinations, which is home to beautiful beaches, great shopping districts, local friendliness, scuba diving, and many more others. In fact, it is ranked as the 7th best Island destination in Asia.

Despite Cebu is a popular destination among foreign tourists, the food is not as appreciated as other Southeast Asian countries like Thailand or Malaysia. This is a question commonly asked by tourists if there are recommended street foods to try in Cebu. Unlike other Southeast Asian countries, one thing to know that in Cebu, most of the popular street foods are found in the food market rather than in the streets.

In this post, I will be sharing you list of amazing Philippine street food you should visit and fill up your stomach.

Taho is a Philippine snack food which is made from soft tofu, arnibal and sago pearl, and it is mixed with brown sugar syrup. Among locals, this is considered a popular morning comfort food in Cebu

In Cebu City, the vendors usually walk around in the street and sell this hot snack in the morning. If you want to try Taho, they are usually found during morning rush hours up to 8 or 9 am, either near the hotels or in busy streets.

Balut is a fertilized embryo egg that is boiled and eaten from the shell. The egg is usually incubated 14 and 21 days before it will be cooked.

Although this is Filipino food, it is rarely consumed by locals due to shifting to western food. Also, based on the local’s belief, this food can actually increase your sexual drive, and it is considered a Viagra for men.

If you want to try this food, it is located in Street Food by Sugbo, which is a food market that sells local street foods in the central business district in Ayala Mall in Cebu City. It is open daily from 12 pm to 12 am.

In Cebu, chicken and organ barbecues are very popular which is found mostly in local street places. They commonly sell such as chicken, liver, pork and intestine barbecues. This food is commonly eaten with rice or puso, rice wrapped in banana or coconut leaves. Since Filipinos in general love rice, puso is mostly found in street food places.

If you want to try eating barbecue foods in a nice place, it is highly recommended going to Larsian Cebu. Larsian Cebu is a popular local street food market that is located between Chong Hua Hospital and Robinson Cybergate. If you are looking for this place, everyone is familiar with these two landmarks, and the street market is found there. In this food market, they sell barbecues and other seafood such as shrimp and grilled fish.

In most streets in Cebu, vendors sell fried fish ball and tempura which are deep-fried in oil. They are considered favorite snacks food among locals which is very affordable. Also, they are available usually in the afternoon starting at 3 pm since it is at that time students and workers are going home from schools and works.

They can be found in any streets, however, for a nicer and convenient place, this snack is found in a food market in Street Food by Sugbo, which is located in a central business district within the mall premises called Ayala Center Cebu. This food market is open daily from 12 pm to 12 am.

Kwek Kwek is a Filipino street food which is a deep-fried hard-boiled egg covered with an orange battered. Traditionally, a quailed egg is commonly used when serving Kwek Kwek, and it served with a spiced vinegar dip. In most vendors, it is placed in a plastic cup where they put kwek kwek and mixed it directly with vinegar.

Like fried fish ball and tempura, they are usually found starting at 3 pm in busy streets.

Hot Dog and Chorizo are another street food that is commonly sold in Cebu. If you walk around in the street, they mostly hotdog since it is affordable and delicious. On the other hand, chorizo or Longaniza is mostly found in specific street food places such as in Larsian Cebu. This is a pork sausage that is mixed with meat, intestine, and fats which has a sweet flavor. In the Philippines, their foods are known to have a distinctive sweet taste.

Unlike other Southeast Asian countries, the street foods in Cebu are highly recommended to try in Food Markets such as Larsian Cebu or The Street Food by Sugbo, rather than in the streets. That is because it is hard to tell if the food sold in the streets are clean. Also, it is not convenient to eat there due to congested and narrow roads.

If you want to try local street foods, these are highly recommended Food Markets to visit in Cebu, which is popular among tourists

A. The Sugbo Mercado I.T. Park

C. The Market by Sugbo

D. The Street Food By Sugbo

Bio: Dr Saif Al Deen Odeh is a licensed physical therapist and a food blogger that love sharing delicious food recipe and review restaurants and street food in the Philippines. He is practicing his profession in the Philippines at day and blog about food at night. He is currently managing a food blog called The Odehlicious- theodehlicious.com

Different Ways To Cook Chicken Breast On Stove
Top Rated SCAA-Certified Automatic Drip Coffee Makers of 2019
How to get the most bang for your buck with meal delivery?
7 Bread-Based Dishes That Are Worth the Carbs
How To Slice Cooked Steak: All You Need To Know