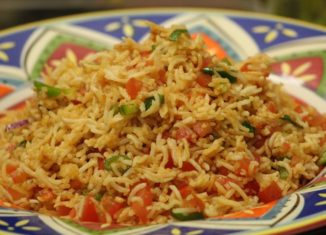 Cuisine from different countries have a lot of differences and not so few similarities. In gastronomy, the most subtle details usually turn out to be the most important. And this specifically applies to Mexican cuisine, always so rich and spicy.

Surely you have heard a confusion with a well-known dish called “Spanish rice“. It is actually a funny misunderstanding when it comes to calling the Mexican dish, Arroz Rojo, in its original name; Mexicans themselves do not call it “Mexican rice“.

So, what is Spanish rice? Well, Paella is a worldwide known traditional dish from Spain that uses mainly rice. Surely that’s where the mistake comes from, since Spanish food had a strong influence on a lot of countries.

The similarities between these two dishes exist but they are very few. Both are highly flavorful rice-based dishes, undoubtedly each one represents the place where they come from and they mean a lot to their people.

How do they differ from each other

Let’s start by understanding that “Spanish rice”, which we can now call Paella, is one of the main dishes of the Iberic gastronomy. It is a traditional dish that is usually served as a daily meal and surely a must on special occasions.

Paella has an appetizing yellow color due to saffron, an ultra-expensive ingredient that gives the dish its semi-sweet flavor, although in large quantities, its natural flavor can overwhelm those of the other ingredients. A pinch is just the right amount even for a large skillet of paella.

Red rice also has garlic, onion and tomato, among other ingredients. The rice is first sautéed in a pan with oil or fat until it turns a golden brown color. Chicken broth is then added for more flavor, as well as tomato sauce or chopped tomatoes.

Unlike paella, the coloring and flavoring agent used in red rice is cumin; it has a nutty and spicy flavor that adds a subtle hint to the red rice. In addition, it gives the red rice its distinctive orange-red color, in contrast to the rich color of the paella.

How was traditional Mexican cuisine shaped?

Mexican food is known to have a plenty of unique dishes in preparation, flavor and presentation. This variety does not only come from pre-Hispanic times, but from the influences it took from other parts of Mesoamerica, as well as those adopted after the arrival of the Spaniards.

Spanish settlers introduced chicken, cattle, barley, rye, onion, carrot, and coriander to the Mexican diet. They also brought rice that came from the exchange they had already with the East, and sesame, which they had discovered with North Africa.

These new influences led to the creation of moles, tamales and atoles, things that are now typical of the country and that had their definitive invention thanks to this powerful cultural exchange.

There is nothing like Mexican food for its vastness. It has strong traditions that go back a long way, but it is also open enough to always adapt, without losing its native roots, as well as its Spanish influence, and showing how flexible but strong their culture is.

If you are looking for more Mexican rice recipes check this:

How to prepare a delicious red rice

Now that the misunderstanding is solved, surely you were left with the desire to savor one of the highest representatives of Mexican food: red rice.

First, blend the tomato with 3 cups of water, 1/4 of an onion, salt and pepper; fry the rice in a saucepan with oil and stir until it reaches the right consistency and begins to brown.

Add the sauce, cover, lower the heat and cook for about 20 minutes or until the rice is cooked and dry.

Chop the remaining onion and fry it in a saucepan with little oil, when it is seasoned you can combine the corn kernels and pumpkins.

Season with salt and pepper, cover the container and cook over low heat until the pumpkins are cooked.

Remove from the stove and include the rice, stir carefully and let stand a couple of minutes before serving.

Rory Brown of Charleston, SC: Lifestyle & Food Blogger Talks Healthy Eating for Longevity
Regional hotdog topping variations
What you need to know about stainless steel work table?
Best Vegetables You Should Eat Fresh
Wood-Fired vs. Natural Gas Pizza Ovens: Which One Should You Choose and Why?