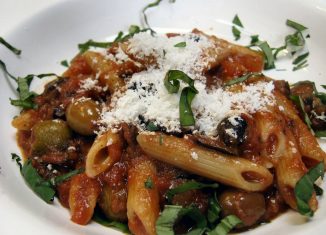 Caponata (Sicilian: capunata) is a Sicilian eggplant dish consisting of a cooked vegetable salad made from chopped fried eggplant and celery seasoned with sweetened vinegar, with capers in a sweet and sour sauce.

Arancini are stuffed rice balls which are coated with bread crumbs and then deep fried. They are usually filled with ragù (meat and tomato sauce), mozzarella, and peas.

Ricotta is an Italian whey cheese made from sheep, cow, goat, or Italian water buffalo milk whey left over from the production of cheese. Like other whey cheeses, it is made by coagulating the proteins that remain after the casein has been used to make cheese, notably albumin and globulin.

It is made with tomatoes, fried or sauteed aubergine (eggplant), grated ricotta salata cheese, and basil.

Sea Urchins is often eaten raw, or with lemon and known as ricci on Italian menus where it is sometimes used in pasta sauces. It can also flavour omelettes, scrambled eggs, fish soup, mayonnaise, béchamel sauce for tartlets, the boullie for a soufflé, or Hollandaise sauce to make a fish sauce.

Pani ca meusa is a Sicilian street food. Literally, its name means “bread with spleen”; its Italian name is panino con la milza. It is a dish exclusively typical of Palermo and it consists of a soft bread (locally called vastedda or vastella) flavoured with sesame, stuffed with chopped veal’s lung and spleen that have been boiled and then fried in lard. This is definitely the dish to note down when planning on where to stay in Palermo for the top local foods not to be missed around the area.

The stigghiola is a Sicilian food specialty, typical of the streets of the city of Palermo. It consists of guts (usually of lamb, but also of goat or chicken) which are washed in water and salt, seasoned with parsley and often with onion and other pot herbs, then stuck on a skewer or rolled around a leek, and finally cooked directly on the grill.

Cannoli are Italian pastries of the Sicily region.

Granita is a semi-frozen dessert made from sugar, water and various flavorings. Originally from Sicily, it is available all over Italy in somewhat different forms

Cassata or Cassata siciliana is a traditional sweet from all areas of Sicily, Italy, born in Palermo. Cassata consists of round sponge cake moistened with fruit juices or liqueur and layered with ricotta cheese and chocolate chips (which is also the cannoli’s filling). It is covered with a shell of marzipan, pink and green pastel colored icing, and decorative designs. The cassata is topped with candied fruit depicting cherries and slices of citrus fruit characteristic of Sicily.

Top 10 Simple Greek Cuisine Recipes
20 must eat food in Georgia
10 amazing dishes you must try in Denmark
What to eat in Denmark? Best Danish food & cuisine
Food you need to try in Czech Republic