You are here
Home > Europe > What to eat in Tuscany? Best Tuscany food 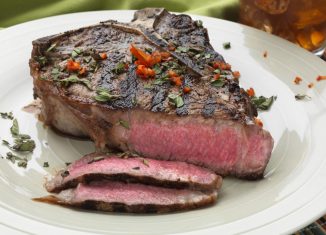 Fettunta – or “greased slice”.   It’s simply grilled bread, rubbed with a garlic clove, drizzled with the best olive oil you have, and then sprinkled with coarse sea salt.

Panzanella or panmolle is a Tuscan salad of bread and tomatoes that is popular in the summer. It includes chunks of soaked stale bread and tomatoes, sometimes also onions and basil, dressed with olive oil and vinegar.

Ribollita is a famous Tuscan soup, a hearty potage made with bread and vegetables. There are many variations but the main ingredients always include leftover bread, cannellini beans, Lacinato kale, cabbage, and inexpensive vegetables such as carrot, beans, chard, celery, potatoes and onion. Its name literally means “reboiled”.

Farinata,  socca, torta di ceci  or cecina is a type of thin, unleavened pancake or crêpe of chickpea flour originating in Genoa and later a typical food of the Ligurian Sea coast, from Nice to Elba island.

Acquacotta is a broth-based hot soup in Italian cuisine that was originally a peasant food. Its preparation and consumption dates back to ancient history, and it originated in the coastal area known as the Maremma in southern Tuscany and northern Lazio. The dish was invented in part as a means to make hardened, stale bread edible. In contemporary times, ingredients can vary, and additional ingredients are sometimes used.

Pappa al pomodoro is a thick Tuscan soup typically prepared with fresh tomatoes, bread, olive oil, garlic, basil, and various other fresh ingredients. It is usually made with stale or leftover bread, and can be served hot, room temperature, or chilled. Pomodoro means “tomato” in Italian; the dish translates to English as “mush of tomato”.

Castagnaccio (locally also known as baldino, ghirighio or pattona) is a plain chestnut flour cake, typically found in the Tuscany, Liguria, Piedmont, Emilia-Romagna regions of Italy, and in the French island of Corsica.

It is a typically autumnal dessert, made by a dough of chestnut, water, olive oil, pine nuts, and raisins, and baked. Local variations may include other ingredients, such as rosemary, orange rind, fennel seeds, and other dried fruit. There are also variations on the thickness of the cake, and specific names are sometimes used locally to refer to such variations. For example, in Livorno, a castagnaccio 3 centimeters thick is called “toppone”. Castagnaccio is best served with ricotta, chestnut honey or sweet wines such as vin santo.

Tortelli is a type of pasta traditionally made in the Lombardy, Emilia-Romagna, and Tuscany regions of Italy. It can be found in several shapes, including square (similar to ravioli), semi-circular (similar to anellini), or twisted into a rounded, hat-like form (similar to cappelletti). It can be served with melted butter, bolognese sauce, broth, or other sauces.

Many popular forms of tortelli can be found in Tuscany. Tortello del Melo is typical in Pistoia. Potato torricelli is popular in Arezzo, Florence, and Prato. Maremma is known for an unusually large form of tortelli with ricotta and spinach.

If there was one defining Tuscan recipe for me it might just be the recipe for chicken liver pate served on crostini, otherwise known in Italian as crostini di fegatini, crostini neri (‘black crostini’) or crostini toscani.

Sscarpaccia is a traditional pie from Versilia, made with zucchini, flour, eggs and milk. Tradition wants this pie to be baked with both salt or sugar. scottiglia

You can’t go past a pastry shop in Florence without noticing the windows are filled with large, flat, powdered sugar-dusted cakes known as schiacciata alla fiorentina.

Biscotti (English: twice-cooked), known also as cantuccini, are Italian almond biscuits (cookies) that originated in the city of Prato. They are twice-baked, oblong-shaped, dry, crunchy, and dipped in a drink, traditionally Vin Santo.

T-bone steak is one of the most famous dishes you may find almost everywhere in Florence, known simply as bistecca alla Fiorentina. The name refers to the particular cut of the meat. According to the “rules”, a Fiorentina steak should be from the Chianina cow (a breed which comes from the Valdichiana in Tuscany), but since it’s quite expensive and Chianina cows are not numerous, there are many places where you can have a steak at a slightly lower price.

Hgh-quality lard, spiced and put to mature in marble tanks rubbed with garlic, an excellent product which wins consumers’ taste, starting from sight and smell. Served as a starter.

Lampredotto is a typical Florentine dish, made from the fourth and final stomach of a cow, the abomasum.

“Lampredotto” is derived from the Italian word for lamprey eels, lampreda, as the tripe resembles a lamprey in shape and color. A sandwich with lampredotto—panino al lampredotto—has been described as a “classic Florentine” sandwich and is a traditional regional street food in Florence. Lampredotto is typically chopped, slow-cooked in a vegetable broth, seasoned with herbs, and served on a bread roll. It is often topped with a spicy sauce or a green sauce (salsa verde).

What to eat in Denmark? Best Danish food & cuisine
What to eat in Sardinia?
Food you need to try in Czech Republic
What to eat in Russia? All about Russian cuisine
Jewish Cuisine, Thousands of Years in the Making