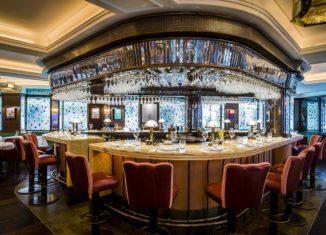 Once upon a time, the mere mention of food in London was unimpressive. It was a place for fish and chips and nothing more than a few bland offerings. And then quite suddenly, while no one was paying it any attention at all, London transformed its food scene from being a place that was only great between meals to a gastronomic destination for gourmands everywhere.

According to Forbes, in London, one new restaurant opens up every 2 days, making the job boom for the restaurant industry here exceptional. With work in London in the food and beverage sector so easily available, it’s giving budding chefs their chance to get in on the ground floor and be a part of London’s restaurant revolution.

To think that just a few decades ago, no one paid London any mind when it came to the dining scene. Fast-forward a good 30 years and now it’s a revered global destination for gourmands. Now at the top of the industry, it’s one of the most influential cities for restaurants. The reason? Top chefs that have paved the way, generating identity and reshaping the food industry, not just in London, but in the world.

They were able to gain an outstanding foothold in the industry because of the rollout of Planet Hollywood’s London location. When some of the biggest names in 90s action movies turned out in 1992 to attend the grand opening including Bruce Willis, Sylvester Stallone, and Arnold Schwarzenegger, it was a hit. It put the celebrity into the restaurant industry and people came in droves to splurge on dining out.

Quaglino’s soon re-opened with a new and improved image, which served up outstanding service and glamour alongside bottomless bread baskets. Carving an approachable, delicious, and media-loving template, it became the backdrop for the star chefs of London to truly shine.

Not long after, the obsession for cooking shows grew. They became focal points for everyone, not just those struggling to keep up with dear Julia Childs while trying to prep dinner for the evening. As the television industry found a new niche to explore, the chefs that helmed those shows became celebrities virtually overnight.

Who could forget Jamie Oliver and his simplistic yet astounding recipes? Though of course, one of the most notable of all, Gordon Ramsay, was watched not just for his exceptional talent as a chef, but his colorful insults for chefs that didn’t keep up with his stringent standards of quality. All this boded well for both the entertainment industry and the restaurant industry, but the greatest impact was made in London.

The industry has continued to go full steam ahead, fueled even further by the London Olympics back in 2012. This helped the somewhat industrial and rundown section of Stratford revitalize. Instead of the West End holding all the cards, with the revitalization, more restaurants opened here, opening up even more experimentation. Then over in East London, the more oddball-esque eateries opened up, quirky cafés and all-day breakfast places. Londoners simply couldn’t get enough. Were they starved for foods that were as delicious as their dreams? Were they finally channeling their own creativity to go from bland and uneventful meals served with sides of mushy peas?

Whatever the reason, they were inspired to dine out with the same kind of zeal the rock music fans have for the music. It’s a cult following that like rock n’ roll, will never die. The bustling food scene has created work in London (praca w Londynie), and for hungry patrons, dishes that speak to their very souls.

Visit London and take a walk through Shoreditch or Soho. On any given night of the week, the queues outside every restaurant are lengthy. The demand is there and the success is proven. The people of London have spoken and they speak volumes with their wallets as they gleefully pay to sample the diverse menus that pay homage to different geographic regions.

It’s not to say that fish and chips is dead as a door nail. Even Gordon Ramsay himself wouldn’t turn down a proper plate of it. But Londoners have found there’s more to life than eating the same things. Think of it, if you will, like a picky child that has only stuck with macaroni and cheese, cheeseburgers, or chicken tenders, never to stray. Then one day, there are none of the child’s old standby items available. It’s eat or be eaten, and suddenly, the child is given something new, something that they approach with apprehension to discover they’ve been missing out.

Just like that child, Londoners are now sopping up every last morsel they can get of these foods. It’s like they’ve awakened from a deep sleep, Rip Van Winkle-style, and now they’re making up for lost time. Now that London boasts some of the best award-winning restaurants on the planet, it’s time to make your move and taste the difference while holding out your plate to see what new delights you’ll find next.

Fine Restaurants: What Are The Benefits Of Eating in One?
What to know about Dinosaur Diets?
The Most Refreshing Iced Teas to Try This Summer
3 Surprising Dishes You Never Thought You Can Cook Sous-Vide
What Can You Make With Kaiser Buns?