You are here
Home > Europe > Jewish Cuisine, Thousands of Years in the Making 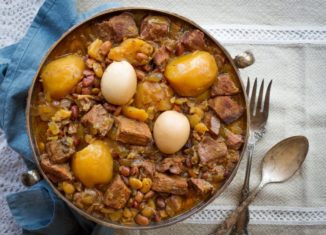 Jewish people are more than a nation, they bound by religion, but they also adhere to codes of conduct, traditions and rites. There are Jewish communities in all corners of the earth, and their food is one of many things that makes them a community.

Jewish food has changed over time; it has readjusted to the places where the Jewish people has established, yet, some dishes are always present and are great representatives of the style.

Although Jewish and Israeli food might have similarities, they’re also distinctive, Jewish people in Israel use local products, getting different results from Jewish communities in New York City, for example.

Because there’s much to learn from this ancestral cuisine, here is all you need to know about Jewish food.

Kashrut, the Laws Behind Jewish Food

What is Kashrut? It’s a set of rules designed thousands of years ago to make food safe, and breaking them means breaking god’s law. Although the rules were written long ago in the Torah, they’re continually being adapted to match current technologies and food processing methods. These rules are complex, but here are the most significant points:

Amongst many other restrictions and some exceptions, the guidelines above dictate Jewish food, and the following are amongst its most delicious dishes.

You can enjoy the white gefilte fish dumplings as appetizers and are very common during the Shabbat and other Jewish holidays.

Lox is salmon belly cut in thin slices and brined in salt for preservation. A significant difference between similar products is that lox is never smoked or cooked. Lox’s smooth texture is unbeatable, and its flavor is reminiscent of the sea. You’ll find lox as an ingredient for bagels.

The secret behind these starchy dumplings is matzo (or matza) unleavened flat-bread common in Jewish cuisine, a typical side dish for Passover feasts.

To make kreplach, you must make thin dough wraps and fill them with seasoned meat. The resulting dumplings are not so different from Asian wontons, and they’re even more alike when served in a rich broth.

Beef, chicken and cheese are common kreplach fillings, and the one-biters are well known for their labor-intensive cooking process.

Imagine a small, golden pastry filled with enticing preparations including cheese, meat, potatoes, or cooked onions. Anything goes (within Kosher rules) inside these savory delicacies.

The crust can vary too and can be soft of addictively crispy, but they’re always beautiful tasty treats.

Specialized bakeries (knisheries) and even street food carts make and sell varied knishes, and are enjoyed by everyone, not just the Jewish communities.

Also known as Chamin, this one is another Shabbat special dish. Not overly complicated, this is a mean stew made with beans, barley, meat and potatoes (rice, chickpeas and eggs are sometimes added too.) There are dozens of variations, every family seems to make Cholet differently.

The aim is the same, a hearty stew with flavor intensity and heartwarming seasoning.

Jewish cuisine has lots of sweet dishes too, and one of the most memorable is the Lekach. The honey cake to rule them all is a sponge cake drowsed with honey and seasoned with winter spices like cinnamon, ginger, nutmeg and clove.

The result is a festive cake served during Rosh Hashanah, the Jewish new year. Bakers can use coffee to give color and aromatics to the cake, and spices may vary, but lekach’s most important ingredient is ubiquitous: honey.

Challah means a loaf of bread, but don’t think for a second it isn’t extraordinary; the slightly sweet bread with a shiny crust is filled with symbolism and is baked for special occasions.

Flour, eggs, sugar, oil and a pinch of salt make this fluffy bread, and it’s often shaped to resemble a spiral or a braid.

As Jewish communities continue to populate other areas, with their customs and recipes on their backs, you’ll see their culinary specialties more often.

You don’t have to be Jewish to enjoy some of these rare dishes, and although some of them might sound unorthodox, trying new things is the best way to train your palate. Enjoy Jewish cuisine and learn something new!

10 amazing dishes you must try in Denmark
15 must try Sicilian food - best Sicilian dishes
What to eat in Russia? All about Russian cuisine
What to eat in Crete? 26 best Cretan food you need to try
The 20 Best Dishes to Try in Spain