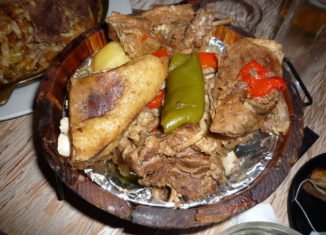 Mongolian cuisine primarily consists of dairy products, meat, and animal fats. The most common rural dish is cooked mutton. In the city, steamed dumplings filled with meat—”buuz”— are popular.

Khorkhog  is a barbecue dish in Mongolian cuisine. Khorkhog is made by cooking pieces of meat inside a container (metal milk jugs are a traditional and typical choice, although any container sturdy enough to hold the hot rocks will serve.) which also contains hot stones and water, and is often also heated from the outside.

Kumis is made by fermenting raw unpasteurized mare’s milk over the course of hours or days, often while stirring or churning.  During the fermentation, lactobacilli bacteria acidify the milk, and yeasts turn it into a carbonated and mildly alcoholic drink.

Buuz is a type of Mongolian steamed dumpling filled with meat . Buuz are filled with minced mutton or beef, which is flavoured with onion and/or garlic and salted. Occasionally, they are flavoured with sprouted fennel seeds and other seasonal herbs. Mashed potato, cabbage, or rice may be added as well.

Other types of dumplings are boiled in water (bansh, manti), or deep fried in mutton fat (khuushuur). Other dishes combine the meat with rice or fresh noodles made into various stews (tsuivan (ru), budaatai huurga) or noodle soups (guriltai shol).

Tsuivan is one-pot Mongolian stew with vegetables, meat, and fresh or fried noodles.

Mongolian stew with rice, vegetables, and meat. Traditionally, mutton is used, other types of meat such as beef work just as well.

Boiled meat and boiled innards. This is the most traditional, simplest, and ubiquitous dish of the mongolian nomads. The meat of an animal (usually mutton) is cut into handy chunks together with the bones, and boiled in salted water until ready. Originally, this was the full meal, today some vegetables or a condiment like Ketchup are usually added. The meat is eaten with the fingers, using a sharp knife.

Mongolian soup called Guriltai shul is a meat based soup that gets its flavor from the meat and a few vegetables.  The soup is topped with tasalsan Guril (Mongolian noodles whicha are fried and used to top other dishes).

Marmot or goat, cooked with hot stones . The stones are instead filled into the stomach of the animal, which gets cooked within its own skin.

Boortsog is a type of fried dough food found in the cuisines of Central Asia, Idel-Ural, Mongolia and the Middle East. It is shaped into either triangles or sometimes spheres.[2] The dough consists of flour, yeast, milk, eggs, margarine, salt, sugar, and fat. Boortsog is often eaten as a dessert, with sugar, butter, or honey. They may be thought of as cookies or biscuits, and since they are fried, they are sometimes compared to doughnuts. Mongolians and Turkic peoples sometimes dip boortsog in tea.

Chinggis is a brand of vodka from Mongolia, produced by UFC Group and introduced in 2009. It was awarded double gold in the San Francisco World Spirits Competition 2011 and gold medals in the Prod Expo 2009 and the Monde Selection 2010. In Mongolia, Chinggis vodka accounts for 30% of the spirits market.

Süütei tsai is a traditional Mongolian beverage. The name suutei tsai in Mongolian means milk tea. The ingredients to suutei tsai are typically water, milk, tea leaves and salt. A simple recipe might call for one quart of water, one quart of milk, a tablespoon of green tea, and one teaspoon of salt. But the ingredients often vary. Some recipes use green tea while others use black tea. Some recipes even include butter or fat. Milk in Mongolia is typically fresh, whole milk, and using half and half[clarification needed] instead of milk produces a rich beverage close to the authentic.

Horse meat is popular in Mongolia.  Horse is usually eaten in winter because of its great calorific value.

Salted horse meat sausages called kazy are produced as a regional delicacy by the Kazakhs. Generally, Mongols prefer beef and mutton (though during the extremely cold Mongolian winter, some people prefer horse meat due to its low cholesterol). It is kept unfrozen, and traditionally people think horse meat helps warm them up.

Gambir is fried layered bread common in the cuisines of Central Asia.

Cake stamped in the form of a shoe sole.