You are here
Home > Asia > What to eat in Kazakhstan? Kazakhstan food and national meals 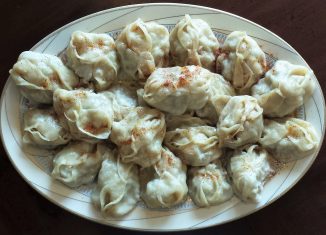 Beshbarmak is the national dish of Kazakhstand and among nomadic Turkic peoples in Central Asia. The term Beshbarmak means “five fingers”, because nomads used to eat this dish with their hands. The boiled meat is finely chopped with knives, mixed with boiled noodles, and spiced with onion sauce. It is usually served in a big round dish. Beshbarmak is usually served with shorpo – mutton broth in bowls called kese. Typically, shorpo is served as a first course that is followed by courses of beshbarmak and a drink called ak-serke (shorpo spiced with kymyz or ayran).

Shashlik is a common dish in Central Asia (Kazakhstan, Kirgystan, Georgia). It consists of meat cubes skewered with some vegetables cooked over an open fire or a bed of coals. Do not confuse shashlik with shash kebabs. Kebabs are also cooked on skewers but consist of small meatballs of ground meat mixed with herbs.

Kazy or kazi is a traditional sausage-like food of Kazakhs, Tatars, Kyrgyz, and other ethnic groups mainly of Central Asia, particularly those of Turkic origin. Kazy is a common element on a dastarkhan, a table set for a festive meal.

In Kazakh cuisine, the manti filling is normally ground lamb (sometimes beef or horse meat), spiced with black pepper, sometimes with the addition of chopped pumpkin or squash. This is considered to be a traditional Uyghur recipe. Manti are served topped with butter, sour cream or an onion sauce or garlic sauce. When sold as street food in Kazakhstan, manti are typically presented sprinkled with hot red pepper powder.

Pelmeni are dumplings consisting of a filling wrapped in thin, unleavened dough. The dough is made from flour and water, sometimes adding a small portion of eggs. The filling can be minced meat (pork, lamb, beef, or any other kind of meat), or fish. The mixing together of different kinds of meat is also popular. Various spices, such as black pepper and diced onions as well as garlic, are mixed into the filling.

Baursak (also Boortsog, boorsoq, bauyrsaq) is a delicious puffy fried bread served on special occasions all over Kazakhstan. The dough consists of flour, yeast, milk, eggs, margarine, salt, sugar, and fat. Tajik boortsog are often decorated with a criss-cross pattern by pressing the bottom of a small strainer on the dough before it is fried.

Kumis (also spelled kumiss or koumiss or kumys) is a fermented dairy product traditionally made from mare’s milk. The drink remains important to the peoples of the Central Asian steppes, of Huno-Bulgar, Turkic and Mongol origin: Kazakhs, Bashkirs, Kalmyks, Kyrgyz, Mongols, and Yakuts. Kumis is a dairy product similar to kefir, but is produced from a liquid starter culture, in contrast to the solid kefir “grains”. Because mare’s milk contains more sugars than cow’s or goat’s milk, when fermented, kumis has a higher, though still mild, alcohol content compared to kefir.

Chal, or shubat is beverage of fermented camel milk, sparkling white with a sour flavor, popular in Central Asia — particularly in Kazakhstan and Turkmenistan. In Kazakhstan the drink is known as shubat, and is a staple summer food. Shubat typically prepared by first souring camel milk in a skin bag or ceramic jar by adding previously soured milk. For 3–4 days, fresh milk is mixed in; the matured chal will consist of one third to one fifth previously soured milk

Laghman is a Central Asian noodle dish. It is especially popular in Kyrgyzstan and Kazakhstan where it is considered a national dish of the local Uyghur and Dungan ethnic minorities.  The dish is likely to have been derived from the Chinese lamian .

Plov is a dish in which rice is cooked in a seasoned broth. In some cases, the rice may attain its brown or golden color by first being sauteed lightly in oil before the addition of broth. Cooked onion, other vegetables, as well as a mix of spices, may be added. Depending on the local cuisine, it may also contain meat, fish, vegetables, pasta, and dried fruit.

Dressed herring, colloquially known as herring under a fur coat is a layered salad composed of diced pickled herring covered with layers of grated boiled vegetables (potatoes, carrots, beet roots), chopped onions, and mayonnaise. Some variations of this dish include a layer of fresh grated apple while some do not. Grated boiled beet root covered with mayonnaise as a final layer gives the salad a rich purple color. Dressed herring salad is often decorated with grated boiled eggs (whites, yolks, or both).  This amazing salad is on the tables of almost all families in Russia and Kazakhstan in New Year’s Day.

Extremely popular and available in a bewildering array of fat percentages (up to 40 percent fat), sour cream is served with just about everything. A tasty addition to Borsch and with manti, it does not go so well with chocolate biscuits! Tvorog cottage cheese is a common filling for pastries and pancakes.

Samsa – pastries shaped like triangles and filled with meat.

Chak Chak is the rice krispie treat of Kazakhstan.

Kuurdak  is a traditional meat dish made in Central Asia, especially among the Kyrgyz.  It is described as “stewed brown meat”.  Kuurdak is usually made from mutton, fat and onion, it can be made using beef or any other kind of meat except pork. In Kazakh cuisine kuurdak is made from sheep’s liver, kidney, heart and lungs.

How Changing Your Diet Can Make You Feel Healthier

Can you cook with whipped cream?

11 Foods Your New Mom Friends Will Love This Holiday Season

When Is The Best Time To Use Disposable Vape