You are here
Home > Asia > What to eat in Sri Lanka? Best Sri Lankan food 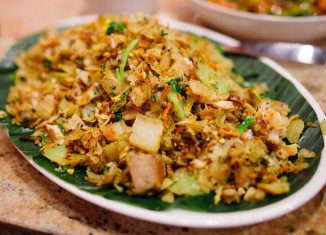 Kottu, also known as Koththu Rotti or Kothu Roti (meaning chopped bread), is a Sri Lankan dish made from godhamba roti (a type of Sri Lankan roti) and vegetables, egg and/or meat, and spices. The bread is described as similar to the type found in the south Indian kothu parotta and roti canai, with the former dish overall being very similar to the Koththu Rotti. A common dinner dish, kothu has become popular in cities with a significant Sri Lankan diaspora population, such as Toronto and New York City’s Little Sri Lanka neighborhood.

Generally, the consumer chooses what and how much of the  ingredients are included if someone else is preparing. Kothu is considered the Sri Lankan equivalent of the hamburger, in terms of its popularity.

Lamprais, commonly known as lump rice, is very popular in Sri Lanka. Lamprais is derived from the Dutch word lomprijst,  which loosely translated means a packet of food. It consists of two special curries (a three meat curry – beef, pork and lamb – and ash plantain with aubergine), seeni sambal, belacan, frikadeller meatballs, a deep fried boiled egg and rice boiled in stock, all of which is wrapped in banana leaves and steamed in an oven.[4] Although the original recipe includes a mixture of meats you can make it with a single meat or a vegetarian version with TVP or grilled cubed veggie burgers.

Rice and curry is the king of Sri Lankan cuisine. There’s a slew of variations depending on what region of Sri Lanka you visit, but the structure is usually the same: spices tempered in hot oil before being combined with chicken, fish or other meat, and coconut milk – essential for the oh-so-delicious curry sauces. Combine with rice or roti, and you’re on to a surefire winner.

A paratha is a flatbread that originated in the Indian subcontinent. It is still prevalent throughout Pakistan, India, Nepal and Burma, where wheat is grown and is the traditional staple of the area. Paratha is an amalgamation of the words parat and atta which literally means layers of cooked dough.

Hopper (Appam) is a type of pancake made with fermented rice batter and coconut milk. It is eaten most frequently for breakfast or dinner. Egg Hoppers are same as plain hoppers, but an egg is broken into the pancake as it cooks

Gotukola is a herb with many medicinal properties & widely used in Ayurveda. The sambol is a refreshing &nutritional salad. Its a great idea to include Gotukola sambol into your weekly diet. Its a easy, quick and tasty salad that goes well with steaming bowl of rice.

Kiribath (milk rice) is a traditional Sri Lankan dish made from rice. The word is a compound with a transparent meaning in the Sinhala language, where kiri (කිරි) means “milk” and bath ( බත්) means “rice”. Kiribath can be considered a form of rice pudding. The dish is prepared by cooking rice with coconut milk, hence this name.

Pol sambola (coconut sambol) is a traditional Sri Lankan dish made from coconut, mostly used as an accompaniment with rice, string hoppers, hoppers, and many more meals.

Curry made of lentils and coconut milk.

King coconut (Cocos nucifera) is a variety of coconut, native to Sri Lanka where it is known as Thembili (Sinhala: තැඹිලි). Sweeter than regular coconuts, there are several sub varieties of the king coconut-the most common being the “red dwarf” (kaha thambili, commonly referred to as gon thambili). The other variety is “ran thambili”, a smaller variety containing about forty nuts in a bunch. The king coconut tree is shorter than coconut trees, and are found commonly growing wild in many areas of the country.

Limonia acidissima (Wood Apple) is a large tree growing to 9 metres (30 ft) tall, with rough, spiny bark. The leaves are pinnate, with 5-7 leaflets, each leaflet 25–35 mm long and 10–20 mm broad, with a citrus-scent when crushed. The fruit is a berry 5–9 cm diameter, and may be sweet or sour. It has a very hard rind which can be difficult to crack open, it appears greenish-brown in colour from outside and contains sticky brown pulp and small white seeds. The fruit looks similar in appearance to the Bael fruit (Aegle marmelos). It contains considerable amount of protein, carbohydrate, ferus, fat, calcium, Vit-B & C etc. 100gms of ripe fruit pulp contains upto 49 KCal.

The central feature of Sri Lankan cuisine is boiled or steamed rice, served with a curry of fish, chicken or mutton, along with other curries made with vegetables, lentils, or fruits. Dishes are accompanied by pickled fruits or vegetables, chutneys, and sambols. coconut sambol is especially common, a paste of ground coconut mixed with chili peppers, dried Maldive fish, and lime juice.

Buffalo curd is a traditional type of yogurt prepared from buffalo milk. It is popular throughout south Asian countries such as Bangladesh, India, Nepal, Pakistan, Sri Lanka, etc. Buffalo milk is traditionally better than cow milk due to its higher fat content making a thicker yogurt mass. Mostly clay pots are used as packaging material for Buffalo curd. The naming curd is traditionally used in the Indian subcontinent to refer to yogurt.

50 Thai must eat dishes - Spice Things Up with the Tastes of Thailand
What to eat in Indonesia? Best indonesian food list
Taste the Best of Malaysia - 28 Best Malaysian Food
What to eat in Kazakhstan? Kazakhstan food and national meals
Amazing Street Foods to try in Cebu