You are here
Home > Articles > 10 Hottest Peppers in the World 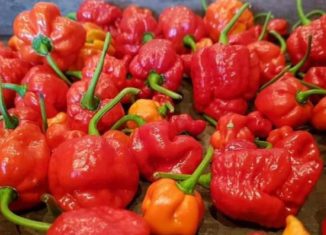 The Scoville scale is a measurement of the pungency (spiciness/heat of pepper) of chili peppers, or other spicy foods, as reported in Scoville Heat Units (SHU), a function of capsaicin concentration. Capsaicin is one of many related pungent compounds found in chili peppers, collectively called capsaicinoids.  The scale is named after its creator, American pharmacist Wilbur Scoville, whose 1912 method is known as the Scoville organoleptic test.

The Trinidad scorpion (Capsicum chinense) is native to Trinidad and Tobago. On February 13, 2012, New Mexico State University’s Chile Pepper Institute identified the Trinidad scorpion as the hottest chili in the world, with a mean heat of more than 1.2 million Scoville heat units (SHUs) and individual plants with a heat of more than 2 million SHUs.[1] According to the Chile Pepper Institute, the previous record holder was the Bhut jolokia of India, as it never accepted the Infinity chili and Naga Viper pepper that were previous record holders per Guinness World Records.

Aside from the heat, the Trinidad moruga scorpion has a tender fruit-like flavor, which makes it a sweet-hot combination.

The Carolina Reaper, originally named the HP22B, is a cultivar of the Capsicum chinense plant. The pepper is red and gnarled, with a small pointed tail. In 2013, Guinness World Records declared it the hottest chili pepper in the world, surpassing the previous record holder, the Trinidad Scorpion “Butch T”.

The original crossbreed was between a Bhut jolokia (a former world record holder) and a red habanero, and is named ‘Reaper’ due to the shape of its tail.

Dragon’s Breath is a chili pepper cultivar supposedly tested at 2.48 million Scoville units, a claim that would make it the second-hottest chili on record, after the Pepper X. Guinness World Records has different accredited results on the matter, showing the Carolina Reaper as the hottest in the world.

Quick and Delicious Ways to Liven up Your Lunch
How to surprise your guests with some great wedding food ideas?
What Makes A Good Gift Basket?
Main Reasons Why The "Full English Breakfast" Is Still So Popular In Great Britain
Valentine's Day Dinner Ideas for a Cozy Night at Home