You are here
Home > Articles > Health Benefits of Yerba Mate 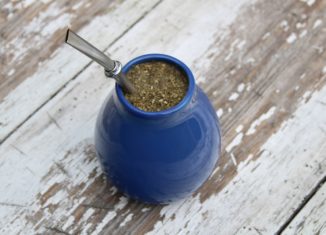 Yerba mate is a traditional South American beverage, made from the dried leaves and twigs of the Ilex paraguariensis plant. The popular drink has been consumed in Argentina, Uruguay, Paraguay, southern Brazil, and parts of Chile for centuries. It has become an integral part of the culture in these countries, with profound social and health benefits attributed to its use. Yerba mate’s unique flavor is often described as earthy or smoky and can be found served hot or cold in many cafes throughout South America.

The history of yerba mate dates back to pre-Columbian times when indigenous tribes brewed this tea-like brew called “caa’e” or cahí. Since then, each region has developed its own unique recipes and methods for drinking yerba mate that has been passed down through generations. not only does it provide a stimulating effect similar to coffee but also boasts numerous health benefits such as containing antioxidants that can reduce inflammation and promote digestion. As its popularity continues to grow throughout the world, more people are discovering the many wonderful qualities that make this ancient drink so special.

Yerba mate is an energizing drink made from the leaves of the South American holly tree. Due to its high levels of antioxidants, yerba mate is believed to be beneficial in reducing inflammation and neutralizing free radicals which can damage cells. It contains several vitamins, minerals, amino acids, and polyphenols that are essential for health. In particular, it contains vitamins A, C, E, and B-complex as well as potassium, calcium, and magnesium. Yerba mate also contains a stimulant called caffeine which can help improve focus and alertness. It has been found to have a low level of toxicity when consumed in moderation so it’s considered safe to drink by most people.

Yerba mate has long been used for its medicinal properties. It is made from the leaves of the Ilex paraguariensis tree and contains several vitamins, minerals, and antioxidants. Studies have shown that drinking yerba mate can increase mental alertness and physical performance, including improving reaction time, stamina, and focus. This beverage has even been found to help reduce fatigue and improve coordination. Yerba mate also contains polyphenols, which are known to help protect against certain types of cancer, lower cholesterol levels, boost the immune system, and reduce inflammation. Additionally, it may help with weight loss due to its high fiber content and ability to reduce appetite.

All in all, yerba mate provides many beneficial health benefits that have been proven through scientific research.

May Help with Weight Loss and Digestion

Yerba mate is packed with numerous health benefits. Studies have shown that it helps to increase metabolism and suppress appetite, which can lead to weight loss. It also contains compounds that aid in digestion and reduce bloating. Yerba mate is rich in antioxidants and vitamins including Vitamin B, C, and E, as well as minerals such as potassium, magnesium, and manganese. It has a unique taste that some people describe as grassy or smoky but can be consumed hot or cold depending on preference.

With its numerous health benefits, yerba mate can be enjoyed as part of a healthy lifestyle for both adults and children alike.

May Lower The Risk Of Certain Diseases, Such As Heart Disease And Diabetes

Yerba mate has been traditionally drunk for centuries as a tonic and social drink, but recent studies have revealed that it also has numerous health benefits. Because yerba mate contains high levels of polyphenols, drinking it may help reduce the risk of chronic diseases such as heart disease, diabetes, and certain types of cancer. Also, yerba mate can help protect against oxidative damage caused by free radicals in the body. Moreover, it is a great source of vitamins and minerals like magnesium, zinc, potassium, and iron, which are essential for overall health and well-being. Drinking yerba mate regularly can provide a number of short-term effects such as improved alertness and concentration, reduced fatigue, and improved moods.

So if you’re looking for an alternative to coffee or tea with added health benefits, give yerba mate a try!

Preparation and Consumption of Yerba Mate

The Traditional Method of Preparation Using A Gourd and Bombilla

Yerba mate is prepared using a gourd and bombilla. The gourd, also known as a calabash, is made from dried-out gourd shells that are then cut open and shaped into the form of a cup. The bombilla is a metal straw that has been perforated on one end to act like a sieve when it comes in contact with the yerba mate leaves. Before serving, the dry leaves are placed inside the gourd, hot water is added and stirred for around five minutes with the bombilla until a foam begins to form on top.

This foam is referred to as ‘mate espuma’ or ‘mate capuchino’ and is indicative of readiness for consumption. The beverage can then be served with sugar and even milk in some cases, providing an energizing and refreshing drink that contains many essential vitamins, minerals, and antioxidants beneficial for health. Yerba mate has become increasingly popular over recent years due to its many documented health benefits, along with its unique flavor profile that varies depending on where it was grown.

Modern Methods of Preparation, Including Using A Thermos or Tea Infuser

The traditional way to prepare Yerba mate involves putting dried yerba mate leaves and stems into a hollow gourd, adding hot water, and drinking through a metal straw called a bombilla. In modern society, however, there are several different methods of preparation that can be used, including using a thermos or tea infuser. When using either of these methods, the same amount of dried yerba mate should be used as when preparing it traditionally. The process begins by rinsing the herbs with cold water before steeping them in hot water for approximately four minutes before consumption. Once steeped, sugar or sweetener may be added depending on personal preference. It is important to note that when drinking yerba mate the use of warm but not boiling water is recommended in order to avoid burning the leaves or stems. Yerba Mate contains many beneficial vitamins and minerals such as Vitamin A, C & E as well as magnesium, iron, and potassium making it not only an enjoyable beverage but also one with numerous health benefits!

Sharing yerba mate in social settings has a profound cultural significance and is deeply ingrained in the culture of South America. It has been used by generations to bring people together, deepen relationships, and share time with one another through conversation and connection. Yerba mate is often shared from a common vessel called a “mate,” which is passed around from person to person. The drink itself stimulates conversation and encourages an open atmosphere for sharing stories, ideas, and even secrets among friends. Additionally, this beverage has been believed to have medicinal qualities such as anti-inflammatory and antioxidant effects, as well as providing an energizing effect for those who partake.

Caffeine Content May Cause Negative Effects On Some Individuals

The potential drawbacks of consuming caffeine can be significant for some individuals, depending on the amount ingested. Caffeine has been linked to an increased risk of anxiety, jitteriness, and increased heart rate, both in the short term and with excessive consumption over a longer period. People who are sensitive to caffeine may experience headaches, difficulty sleeping, irritability, and even depression with increasing doses. It is important to note that caffeine can also increase blood pressure levels which can further exacerbate any underlying hypertension related issues. Additionally, people with certain medical conditions such as heart disease or diabetes should consult their healthcare provider before consuming anything containing caffeine. In general, it is recommended to limit the amount of caffeine consumed daily to no more than 300 mg per day (about three cups of coffee).

Lack of Regulation May Lead to Contamination of Yerba Mate Products

Yerba mate is an herbal tea that has become increasingly popular due to its purported health benefits. However, there are possible drawbacks and cautions one should consider when consuming yerba mate. One of the major concerns is the lack of regulation in the production and sale of yerba mate. Without proper oversight, it can be difficult to determine if the product is safe for consumption or not. Contaminants like lead, arsenic, and pesticides have been found in some batches of yerba mate, which could cause serious health problems if consumed over time. Furthermore, herbal products such as yerba mate are not regulated by the Food and Drug Administration (FDA), so there are no guarantees as to their safety or purity. Therefore, before purchasing or using yerba mate products, it is important to research their quality and origin to ensure it does not contain any contaminants or other added substances that could be harmful for consumption.

Additionally, always read labels carefully for information about product ingredients and their possible interactions with other medications. Doing so can help ensure that the supplement or alternative therapy you take is safe in combination with the medications you are already on.

Yerba mate has long been a popular and culturally significant drink in South America, with its potential health benefits driving much of the interest today. However, these benefits should be consumed in moderation and with caution as too much can lead to negative side effects. Studies have shown that yerba mate may possess properties that can help fight against depression, and heart disease, reduce inflammation and provide a boost of energy. Additionally, it is important to note that there are some risks associated with drinking yerba mate as well, such as high levels of caffeine which can cause adverse effects like nausea, headaches, and insomnia.

Therefore, it is recommended to speak with a doctor before consuming large amounts of the beverage for health reasons. Overall, understanding the potential health benefits does not negate the importance of moderation when it comes to drinking yerba mate or any other caffeinated beverages.

How to get the most bang for your buck with meal delivery?
5 Reasons Why You Should Have a Home Meat Slicer
The Best Halal Meal Recipes for 2021
What is an Erhu?
How London Quietly Became a Foodie Destination and Started Turning Heads