You are here
Home > Articles > Advice for First Time Drinkers 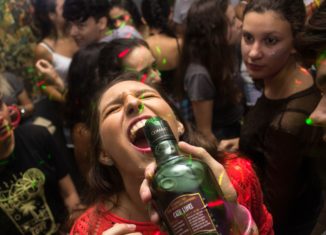 There are many good bars and pubs out there like The Cornershop Bar. Drinking, when done responsibly, can be a pleasant experience used to relax and unwind. Alcohol often plays a large part in social events and is commonly used as a way to socialise and bond with others. In fact, having your first alcoholic drink is almost a rite of passage. Although a legal drug, alcohol comes with its own risks, that range from mildly uncomfortable to unpleasantly fatal, that are often overlooked due to how normalized it is within society. First time drinkers have a tendency to overdo it so if you are not an experienced drinker yet, here are some helpful pointers to make sure your first time is not your last.

Alcohol is absorbed directly into your bloodstream through your stomach and having a meal before drinking makes the rate of absorption a lot slower, decelerating the intensity of those feelings of drunkenness. By eating first, you will be able to drink for longer and have a far more enjoyable night out. Your stomach will thank you later.

Some medications advise that you do not drink while taking them as it can cause adverse effects. You should be especially careful if taking any drugs such as anti-depressants, sedatives, antihistamines and any long-term medication, so always consult your doctor and read your medication’s advice pamphlet. Some medications block alcohol from being metabolized within the body so you feel drunker after only a small amount, while the alcohol may block your medications intended effects. In addition to prescribed medication, illegal drugs such as cocaine, MDMA and amphetamines can have fatal consequences when combined with alcohol, so it is better to avoid these entirely if you intend on drinking.

It might be appealing to try a variety of different drinks but mixing your drinks makes it hard to keep track of how much alcohol you are really consuming. You could be mixing a lot of different drinks with varying alcohol percentages, so it is more difficult to predict when enough is enough. Also, – beware of cocktails – because although they look great and can taste surprisingly unlike alcohol, you are actually mixing a lot of different types of spirits. Instead, find one drink you like and stick with it!

When it comes to drinks such as shots, it’s definitely better to politely decline until you have a better understanding of your tolerance. Hard liquors such as tequila, gin, rum and vodka have a high alcohol content so you will feel the effects of these much faster. It is probably safer to stick to something softer at first like alcopops. Alcopops are typically flavoured and have a lower alcohol content so you can slowly build up your alcohol tolerance while staying in better control.

Water is your friend

It is ok to skip the next drink and replace it with water instead. Alcohol acts as a diuretic, meaning it dehydrates the body, and the higher the alcohol content, the higher the rate of dehydration. This is the reason why we wake up with pounding headaches and dizziness the morning after a night of drinking. It is recommended that for every alcoholic drink you have, you should also have a glass of water to balance the dehydration effect. If you are unable to do this, then drink as much water as possible before going to sleep. It can be the difference between waking up feeling refreshed or waking up feeling like your head is being hammered from the inside.

You might not realise just how drunk you actually are until it is too late, especially, if you are an inexperienced drinker. The faster you drink, the more dehydrated you are and the thirstier you become. If out with friends, you should not feel pressured to drink more but enjoy going at your own pace. Everyone has their own limit and it’s best to take it easy when you don’t know your own. Remember, you are allowed to refuse a shot or skip a round.

Drink spiking normally involves adding an alcohol or drug to someone’s drink without that person’s knowledge and it is against the law. You should always practice vigilance by never leaving your drink out of sight and if possible, watch your drink as it is being made. In addition, it may be tempting to accept a free drink from a stranger, but it is better to politely decline than to take the risk. The drug Rohypnol, better known as the “date rape drug”, is commonly used in drink spiking and can cause drowsiness, slurred speech, loss of memory and vomiting. These symptoms are usually more pronounced than what you would experience while simply being drunk and can be disproportionate in comparison to the amount of alcohol consumed. So, if you experience these symptoms, especially after only consuming a small amount of alcohol, it is important to quickly go to hospital to get checked out.

Make sure you have a reliable designated driver, a booked taxi or other transport home. Alcohol adversely affects your decision-making skills, causing poor judgement and unreliable reasoning so getting home is not something you want to deal with after a few drinks. Book a taxi before going out, especially on weekends, or rotate between your friends who will be the designated driver. If possible, travel with friends and never make your way home alone. Most importantly, never, ever drink and drive. If you drink and drive, you are putting yourself, as well as others, in significant risk of being in an accident.
Most importantly, drinking should be an enjoyable experience and not due to peer pressure or used as a coping mechanism. Therefore, relax when you are out and use these pointers to avoid being that friend who needs looking after and ends up having to go home early. But most importantly, follow this advice to be safe and always drink responsibly.

Try Something New: How to Introduce Even Your Picky Eaters to Foreign Foods
What Kind of Fish is Maguro?
The 5 Best Snacks You've Never Heard About
Turmeric is a magic ingredient!
Get Ready for Your Next Adventure with the Best Camping Food!