You are here
Home > Articles > BBQ Grill History Everyone Should Know 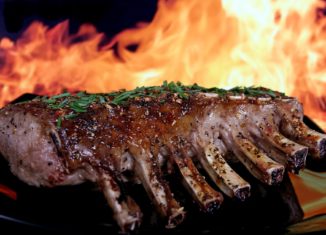 Many people know barbecuing to be an American thing, and they are right. But in the books of history, barbecue was never truly American.

The culture of barbequing started long before there was civilization. Here’s the history of BBQ grills.

We can trace the history of barbecue as far back as the times of the cavemen. Following the discovery of fire, they found out that cooking their meat over a fire not only made the meat more tender but also more delicious.

And because the fire tenderized the meat, it didn’t take them a lot of time to eat it. This left them enough time to hunt and do whatever else cavemen did.

I can imagine that they didn’t first think about cooking their meat over a fire. Instead, they must have just tossed their kills into the fire to burn until it looked good enough to eat.

However, they eventually became wiser in the ways of barbeque and started cooking their foods over the fire. They must have found out that the meat they cooked over fire tasted better and was tenderer, even though it might have taken a while to cook. But thanks to these cavemen, the culture of barbecue still continues.

Barbecue historian, Dr. Howard L.Taylor said that the cavemen used “a wooden fork or spit to hold the meat over the fire”. This made spit roasting the earliest form of barbequing.

Barbecuing In The Bible

Since the cavemen, evidence of the forms of primordial barbequing popped up here and there. But one of the most notable ones was elaborately recorded in the Christian Bible.

In this book, Moses, the leader of the Israelites, told his people that God asked them to make a sacrifice to Him. The end product of that sacrifice was an ancient time barbecue.

Since the time of the bible, many more instances of barbecuing have popped up. However, the most popular one is the history that involves the barbacoa. The name “barbecue” was later developed from “barbacoa”.

Back when European explorers were out on adventures to the new world, they stumbled upon a Caribbean island, around modern-day Cuba and Jamaica. The settlers there were the Taino, and they used an apparatus called the “barbacoa”. Or at least, that must have been what it sounded like to the Spanish explorers.

The first use of this word was recorded in one of the books of Gonzalo Fernández de Oviedo y Valdés, a Spanish explorer and historian. He published these books after many years of exploring the world outside Europe.

He described barbacoa as a lattice that was built from many natural materials. The lattice had many uses. At various instances in his books, he recorded that the barbacoa was used for different purposes. One time, someone slept on it. Another time it was used in building a house.

One other time it was used as a raft. The only time he mentioned that the barbacoa was used for anything related to cooking was when “the bodies of men roasted on a barbacoa”. Not a happy one, right?

From Barbacoa to Barbecue

Later in the 17th century, the barbacoa was associated with real food cooking, not the gruesome kind in Gonzalo’s book. In 1648, Beauchamp Plantagenet made a reference to barbecue in his pamphlet which was titled Description of New Albion. However, the authenticity of Beauchamp’s work has come under the clouds of doubt, so it is easy to dismiss his claims.

However, Edmund Hickeringill had a more trustworthy, but brief testimony. He was also an English pamphleteer. When he lived in conflict-stricken Jamaica soon after power was seized from the Spanish, he noticed something peculiar about the meat cooking method of the Taino people.

Whenever these people hunted and killed wild dogs, they sliced them open and had “their flesh Barbecu’d…”. That was the only reference Edmund made to barbecuing. He didn’t give more details about how they did it.

From the late 17th century to the18th, references to barbecue were also found in the English literature of the time. Behn referenced it in his play where a character shouted, “let’s barbecue this Fat Rogue”.

But later in the 18th century, another evidence came up, and thankfully, this was more elaborate than Edmund’s reference. Olaudah Equiano, an African abolitionist, in his report about a process common among the Americas, described what is very similar to barbecue.

He testified that he saw the Miskitos kill an alligator. They then cooked its meat over a hole they had filled with wood they had burnt down to coal.

Barbecue only became more popular in America during the Cold War. Kristen L. Matthews argued that the popularity of barbecue in America was spurred when the relationship between the Soviet Union and the US was a tricky one.

Around that time, there were also rumors that communists had infiltrated the US. As a result, the Americans needed something that would set them apart. They found their solution in barbecues.

They barbecued day and night until it became something of the Americans. It was a culture they were proud of. Gradually, this barbecue became a thing everyone did at their homes and invited their friends over to enjoy with them.

To date, barbecuing has remained at the heart of Americans, and they have spread the culture to the rest of the world.

Being the tasty phenomenon that it is, Barbecue has attracted its own myths and legends. Of course, most of them are either completely untrue or variants of the truth.

According to one of the myths, the word “barbecue” has origins in French, but this is largely false. It may sound similar to the French phrase, “barbe a queue”, but our meat barbecue is another thing entirely.

The origin of this myth can be traced to an article that National Intelligencer published in 1829. The use of the word “barbecues” was misunderstood by many who read the article.

Another myth is that if you don’t make it with wood, then it isn’t barbecue. It is true that wood is the traditional fuel for making a barbecue fire. But technology has brought us to the point where we have more efficient alternatives to wood.

Today, there are pellet grills and other newer technologies that make wood barbecue better. It only makes sense to take advantage of these tools to make the barbecue we all love.

You would probably think that the history of barbecue grills would be a pretty boring one. But look at that, there is actually a whole lot more to it.

And given the long history of this cooking method, you can learn to appreciate just how far it has come as well as the advancements that have occurred along the way.

Also, enjoy your next barbecue!

Why are food trailers popular? 

Cater Your Next Party with Sushi