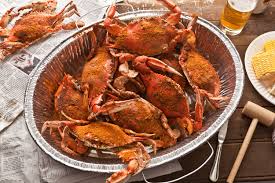 The earliest humans were discovered to be avid beachcombers that pulled sea life from the warm waters off the shores of Africa for their meals. Today, we follow the trend that our ancestors started by plucking our own favorites from the sea. Seafood is a healthy and delicious option for any meal. From fresh-caught fish to shellfish, there’s an incredible world of delights found under the sea.

Among them, crabs seem to be the most popular. Most people think of Alaskan king crab when they think of feasting on crabs, and while it’s certainly a sublime seafood choice, there are many more crabs scuttling about on the ocean floor that make for an amazing meal. While you can use crab meat to make incredible dishes that include crab salad, crab cakes, or even the indulgent Veal Oscar topped with fresh crab meat, sometimes the best way to enjoy crab is cracked right out of the shell fresh from steaming with a side of drawn butter.

Get that plastic bib and claw-cracker ready because these are the crabs you don’t want to miss!

Let’s start with the most popular crab, shall we? This spiny-shelled crab can leave your hands cut up, but the bright white meat found inside is worth all the pain. Alaskan king crab is the largest crab species and is found between October and January in Alaska and the Bering Sea. Indulging in these huge crab legs is a treat for any crab lover!

Another delightful crab that you’ll find starting north in Alaska and all down the West Coast is Dungeness crab. You can get them any time of year, but they’re truly best during harvesting in the late fall to late spring. People typically eat the whole crab, and one crab is generally good for 2 people. The meat inside is sweet with a tender, flaky texture that is purely succulent. This is one crab you don’t want to coat with too much sauce because it’s brilliantly flavorful all on its own.

It’s everyone’s favorite find at those all-you-can-eat buffets because it’s relatively easy to get. Snow crab comes from both the North Atlantic and the North Pacific and is best in the colder months, generally from January through April. Another reason everyone loves these delicious crab legs is because you can snap and eat them without working so hard to crack them. In fact, your claw-cracker might just sit on the sidelines while you dig in to platefuls of these crab legs. You will find these snow crab legs on the Red Lobster menu for a price of $30.49.

Famed in Maryland with Old Bay seasoning, you’ll find blue crab in plenty of places other places along the Atlantic coast. While you don’t need to eat them with Old Bay, you’ll find these crabs are best served whole after steaming. The meat is salty yet sweet, but getting it requires a great deal of effort on your part. The rewards are hefty though for such deliciousness, but if you don’t want to disassemble the entire crab yourself, you might want to go for a different type of crab.

A Floridian delicacy, stone crab claws are only in season from mid-October through mid-May. They’re not cheap either, but one taste is all it takes to get you hooked. The fisherman only remove one claw off each crab, tossing them back into the water where they regrow a new claw and try to avoid being snapped up the next season. They are served steamed and chilled, typically with a mustard sauce though drawn butter is also recommended for enjoying one of the most incredible crabs you’ll ever taste.

You’ve probably seen it on many menus in many places, including your local Japanese restaurant. It’s often served whole and deep fried, resembling a giant spider. Don’t let that put you off though. Soft-shell crab is not one specific type of crab but rather is a term from the culinary world to refer to crabs that have recently molted their shells leaving their new exoskeletons soft. Most often, it’s the blue crab which is a common find in the spring and summer when it molts. The gills, parts of the mouth, and the abdomen aren’t edible but when you get soft-shell crab deep fried or sautéed at a restaurant, those items are removed before cooking so you can eat the whole crab without worry. Just don’t look at it if you are afraid of spiders!

Speaking of spiders, the spider crab thankfully doesn’t look like the frightful arachnid of your nightmares. Popular in Europe and Japan, the spider crabs found there can be found as large as 9-feet wide. Inside the long, spiny legs, sweet white meat is found. Boiled or baked, spider crab is truly divine. You can also find them in Florida though there they aren’t sweet and tender. Perhaps due to the climate there, the meat is tough and muscly, hence why spider crabs enjoy living there because no one wants to eat them.

In Japanese cuisine, the horsehair crab is a delicacy. They’re found year-round just off the coast of Hokkaido. The taste is exquisite and rather delicate. The Japanese boil them live in salted water and they also serve it with the shell removed in a dish called kani miso. The shell is reserved for serving in the typically stunning Japanese way of displaying food.

If your mouth is watering, make a meal of your favorite crabs today. From Alaskan king crab to blue crab to snow crab and everything in between, you can’t go wrong when you choose crabs for your next meal!