You are here
Home > Africa > What to eat in Morocco? Best Moroccan food & cuisine 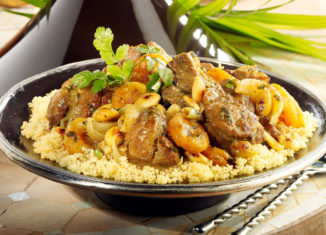 Moroccan tajine dishes are slow-cooked savory stews, typically made with sliced meat, poultry or fish together with vegetables or fruit.  Spices, nuts, and dried fruits are also used. Common spices include ginger, cumin, turmeric, cinnamon, and saffron. Paprika and chili are used in vegetable tajines. The sweet and sour combination is common in tajine dishes like lamb with dates and spices. Tajines are generally served with bread. Because the domed or cone-shaped lid of the tajine pot traps steam and returns the condensed liquid to the pot, a minimal amount of water is needed to cook meats and vegetables. This method of cooking is practical in areas where water supplies are limited or where public water is not yet available.

Chermoula or charmoula is a marinade and relish used in Algerian, Libyan, Moroccan and Tunisian cooking.  It is traditionally used to flavor fish or seafood, but it can be used on other meats or vegetables.  Common ingredients include garlic, cumin, coriander, oil, lemon juice, and salt. Regional variations may also include pickled lemons, onion, ground chili peppers, black pepper, saffron, and other herbs.

Harira is a traditional soup of the Maghreb region, consumed in Morocco and western Algeria. It is popular as a starter but is also eaten on its own as a light snack. There are many variations and it is mostly served during Ramadan, although it can be made throughout the year.

Harira’s base-recipe is composed of the following ingredients, and may vary depending on regions: Tadouira – a thickening mixture made from flour and water and sometimes canned tomato paste, which is added at the end of the harira cooking process, tomatoes and tomato concentrate, lentils, chickpeas, onions, rice beaten eggs, herbs (celery, parsley and coriander) , spices (mainly saffron, ginger, and pepper),  small amount of meat: (beef, lamb or chicken) a spoon or two of olive oil.

A favorite of children and adults alike, Kefta Mkaouara (or Mkawra) is a presentation of petite, cherry-sized meatballs in a zesty homemade tomato sauce. Traditionally this famous Moroccan dish is prepared in a tagine, which lends earthy flavor

B’stillaPastilla (or bəsṭila) is a traditional Andalusian dish consumed in countries of the Maghreb. Andalusian people who migrated to Fez have popularized the dish throughout Morocco. It has also spread to Algeria and Tunisia. Pastilla is said to be “uniquely Moroccan, intricate and grand, fabulously rich and fantastical”.

It is an elaborate meat pie traditionally made of squab (fledgling pigeons). As squabs are often hard to get, shredded chicken is more often used today; pastilla can also use fish or offal as a filling. Pastilla is generally served as a starter at the beginning of special meals.

Khubz is a round leavened Middle Eastern flatbread, that forms a staple of the local diet from the Arabian Peninsula to Morocco. Khubz was traditionally baked in a tannuur, and six recipes for khubz made in this way are included in Ibn Sayyar al-Warraq’s 10th century Kitab al-Tabikh cookery book.

In the cuisine of Northern Africa, Méchoui is a whole sheep or a lamb spit-roasted on a barbecue. The word comes from the Arabic word šawa  which means “grilled, roasted”. This dish is very popular in North Africa. In Algeria and Morocco , the term méchoui “refers to the method of cooking a lamb or a sheep cooked whole on the spit”.

Maghrebi mint tea, also known as Moroccan, Touareg and Sahrawi mint tea is a green tea prepared with spearmint leaves and sugar, traditional to the Greater Maghreb region (the northwest African countries of Morocco, Algeria, Tunisia, Libya, and Mauritania). As a combination of imported ingredients (tea from China and originally imported sugar) and a local ingredient (fresh mint), it is an early example of globalization in cuisine. Mint tea is central to social life in the Maghreb. The serving can take a ceremonial form, especially when prepared for a guest. The tea is traditionally made by the head male in the family and offered to guests as a sign of hospitality. Typically, at least three glasses of tea are served, and it is considered impolite to refuse it.

Zaalouk or Zalouk is a Moroccan salad of eggplant (aubergines), tomatoes, garlic, olive oil and spices. It’s served as a dip with crusty bread.

A briouat is a sweet or savory puff pastry. It is part of the Moroccan cuisine. Briouats are filled with meat (mostly chicken or lamb) mixed with cheese, lemon and pepper. They are wrapped in filo dough in a triangular or cylinder shape. Briouats can also be sweet, filled with almond or peanut paste and fried, then dipped in warm honey flavored with orange blossom water.

Maakouda batata are Moroccan potato cakes or fritters. They’re a popular street food in Morocco, where they might be eaten plain or used as a sandwich filler in wedges of Moroccan khobz.

Couscous  is a Maghrebi dish of small steamed balls of crushed durum wheat semolina, usually served with a stew spooned on top. Couscous is a staple food throughout the North African cuisines of Algeria, Morocco, Tunisia, Mauritania and Libya and to a lesser extent in Sicily.

In Tunisia, Algeria, Morocco, and Libya, couscous is generally served with vegetables (carrots, potatoes, turnips, etc.) cooked in a spicy or mild broth or stew, and some meat (generally, chicken, lamb or mutton).

A common dessert in Morocco is kaab el ghazal (“gazelle’s horns”), a pastry stuffed with almond paste and topped with sugar.

Sliced liver is marinated with the Moroccan spices of cumin and paprika, and then cooked with a generous quantity of fried or caramelized onions

Chebakia is a pastry of Moroccan origin, made of strips of dough rolled to resemble a rose, deep-fried until golden, then coated with a syrup made of honey and rosewater and sprinkled with sesame.

All you wanted to Know About Algerian Food
Ethiopian food & cuisine - what to eat in Ethiopia?
What you need to know before buying a Convection Oven!
Top 27 Egyptian Food - what to eat in Egypt?
Non-stick cookware may boost cholesterol Control - Reason Behind it