You are here
Home > Articles > How to eat jackfruit? 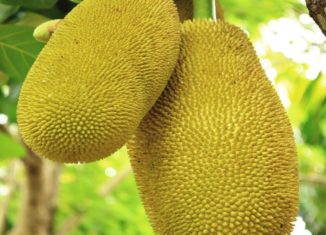 The fruit looks like a sort of big, spiny melon that has to be opened in two and from which the large fleshy seeds that make up the real edible part of the fruit are extracted and which must always be consumed after cooking because raw can be toxic. This food is rich in vitamin C, potassium, calcium, magnesium and phosphorus, it also does not contain gluten. Jackfruits Its taste is neutral and absorbs very well, as it happens for tofu, the flavors of what it accompanies. For this reason, Upton’s Natural has already created ready-to-eat products based on the jack and in particular one kilos and a barbeque version. After cooking, explains who tasted it, Jackfruit takes on a strong flavor of pork. The fruit deteriorates very soon once it is harvested and it is for this reason that it is processed directly on the place of cultivation and then imported into the West. The fruit, especially in Asia, is consumed in dozens of ways: in the form of chips, ice cream, stew, juice and even flour, grinding its seeds.

It is native to India, where it has been cultivated for centuries and is one of the largest tropical fruits in the world. Among its main features, we find the delicious, very sweet taste, reminiscent of pineapple and vanilla. According to experts, this fruit could save agriculture and food production threatened by climate change.

Cultivating Jackfruit trees could be a good idea to replace varieties that will not be able to withstand the effects of climate change. In the opinion of the researchers, Jackfruit could in the future replace basic foods like wheat or corn.

According to the UN, rising temperatures and sudden storms have already reduced yields of corn and wheat crops. There is also talk of a real “food war” for the next few years. The Jackfruit could represent the solution. Only one fruit weighs between 5 and 7 kg and is rich in nutritional properties. Contains good amounts of potassium, calcium, and iron.

jackfruit is visibly similar to Durian (another exotic fruit very famous in Southeast Asia) and contains within it several separable fruits, slightly similar to that of peppers or chilies. It deteriorates very quickly and therefore once opened it is advisable to consume it as soon as possible or to keep it in the refrigerator for a maximum of 2-3 days. The ripe jackfruit has a sweet, fruity and sugary taste, reminiscent of the mix of some fruits that we are more used to consume. The greenest fruits, which are green, must be cooked before being consumed. The jackfruit seeds can also be used in the kitchen, which must first be dried, roasted or roasted before being consumed as the raw seeds are toxic to the human body. The prolonged cooking of this fruit gives it a particular flavor, which can be traced back to that of meat: for this reason, and thanks to its consistency, it lends itself well to being used as a base for making vegetarian or vegan dishes. In this regard, we suggest you boil the jackfruit and then pass it in the pan, seasoning it with spices like paprika, curry or chili. Use it to stuff the tacos or a wrap ( a soft flatbread rolled around some yummy filling), accompanying them with an avocado sauce.

Easy Health Tips for Everyone