You are here
Home > Drinks > What to drink in Brazil? 14 Brazilian must try drinks 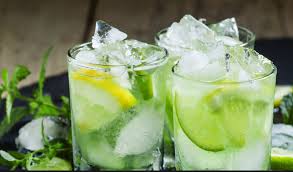 Caipirinha is Brazil’s national cocktail, made with cachaça, sugar and lime. Cachaça, also known as caninha, or any one of a multitude of traditional names, is Brazil’s most common distilled alcoholic beverage. Although both rum and cachaça are made from sugarcane-derived products, in cachaça the alcohol results from the fermentation of fresh sugarcane juice that is then distilled, while rum is usually made from refinery by-products such as molasses.

The drink is prepared by muddling the fruit and the sugar together, and adding the liquor. This can be made into a single glass, usually large, that can be shared amongst people, or into a larger jar, from where it is served in individual glasses.

Caju Amigo, also known as Cajuzinho (Little Cashew), is a Brazilian drink made of cachaça and cashew juice. In some places, a slice of cashew is put in the drinker’s mouth with a little bit of salt, chewed without swallowing, and a shot of cachaça is thrown back straight- swallowing the fruit and the drink at the same time.

Cajuína is a non-alcoholic, non-carbonated beverage made of blended cashew apples. It is traditional in the northeast region of Brazil, especially in the states of Ceará and Piauí.

prepared with maize, rice and sugar. It has also been referred to as corn wine.

Cachaça is a distilled spirit made from fermented sugarcane juice. Also known as aguardente, pinga, caninha[2] and other names, it is the most popular spirit among distilled alcoholic beverage in Brazil. Outside Brazil, cachaça is used almost exclusively as an ingredient in tropical drinks, with the caipirinha being the most famous cocktail.

prepared with cachaça and gooseberry syrup, it is similar to a Kir Royal cocktail (French cocktail, a variation on Kir. It consists of crème de cassis topped with champagne, rather than the white wine used in traditional Kir.)

Chimarrão  is a traditional South American caffeine-rich infused drink.  It is prepared by steeping dried leaves of yerba mate  in hot water and is served with a metal straw from a shared hollow calabash gourd.

Prepared with lime pieces with peel, ice cubes, sugar, and water. The version with condensed milk is also popular.

Batida is a Brazilian cocktail made with the national alcoholic drink cachaça. In Portuguese, batida means shaken or milkshake. It is made with cachaça, fruit juice (or coconut milk), and sugar. It can be blended or shaken with ice.

Rabo-de-galo, which means “cock tail” (in Brazilian Portuguese cocktail is called coquetel), is a Brazilian drink made of cachaça and red vermouth. It is also known as Traçado, the Portuguese word for mixed. Alternatively, is known as a mixture of “everything you have in the bar” in some places.

Quentão, which means “very hot” or “big hot one”, is a hot Brazilian drink made of cachaça and spices. It is often served during the celebrations known as Festas Juninas. The sugar is first caramelized with spices (whole cloves, cinnamon sticks and ginger chunks) and citrus peels (orange and lime). This mixture is then boiled with water for 10 minutes. The cachaça is added and boiled for another 5 minutes.

Leite de onça (Jaguar milk) is a cold Brazilian drink made of cachaça and condensed milk. It is very sweet and has a very suave scent that evokes the homely atmosphere of a Festa Junina. It is not easy to replace the ingredients and achieve a similar result because its taste is very peculiar. It is usually served cold, in plain mugs, without garnish (though often cinnamon or chocolate powder is sprinkled over) so that it looks like milk at a first glance.

Pros and Cons of Alcohol: Is It Worth Giving It Up?
How To Make The Most Out Of Your Wine Tour Experience
Vegan Wine: 6 Options To Try
Delicious Australian Wines You Have to Try
3 Amazing Teas From Around the World